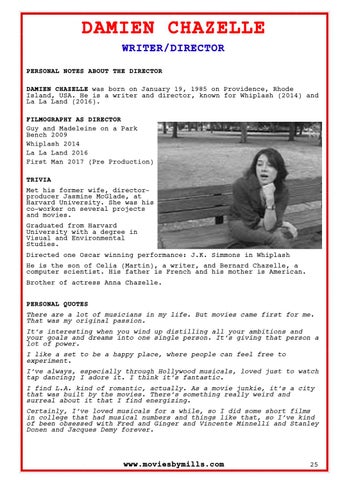 DAMIEN CHAZELLE WRITER/DIRECTOR PERSONAL NOTES ABOUT THE DIRECTOR DAMIEN CHAZELLE was born on January 19, 1985 on Providence, Rhode Island, USA. He is a writer and director, known for Whiplash (2014) and La La Land (2016). FILMOGRAPHY AS DIRECTOR Guy and Madeleine on a Park Bench 2009 Whiplash 2014 La La Land 2016 First Man 2017 (Pre Production) TRIVIA Met his former wife, directorproducer Jasmine McGlade, at Harvard University. She was his co-worker on several projects and movies. Graduated from Harvard University with a degree in Visual and Environmental Studies. Directed one Oscar winning performance: J.K. Simmons in Whiplash He is the son of Celia (Martin), a writer, and Bernard Chazelle, a computer scientist. His father is French and his mother is American. Brother of actress Anna Chazelle. PERSONAL QUOTES There are a lot of musicians in my life. But movies came first for me. That was my original passion. It’s interesting when you wind up distilling all your ambitions and your goals and dreams into one single person. It’s giving that person a lot of power. I like a set to be a happy place, where people can feel free to experiment. I’ve always, especially through Hollywood musicals, loved just to watch tap dancing; I adore it. I think it’s fantastic. I find L.A. kind of romantic, actually. As a movie junkie, it’s a city that was built by the movies. There’s something really weird and surreal about it that I find energizing. Certainly, I’ve loved musicals for a while, so I did some short films in college that had musical numbers and things like that, so I’ve kind of been obsessed with Fred and Ginger and Vincente Minnelli and Stanley Donen and Jacques Demy forever.