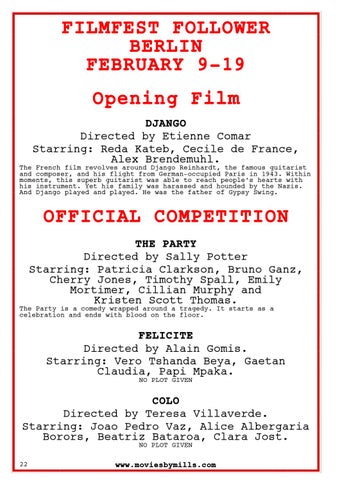 FILMFEST FOLLOWER BERLIN FEBRUARY 9-19 Opening Film DJANGO Directed by Etienne Comar Starring: Reda Kateb, Cecile de France, Alex Brendemuhl. The French film revolves around Django Reinhardt, the famous guitarist and composer, and his flight from German-occupied Paris in 1943. Within moments, this superb guitarist was able to reach peopleâ&amp;#x20AC;&amp;#x2122;s hearts with his instrument. Yet his family was harassed and hounded by the Nazis. And Django played and played. He was the father of Gypsy Swing.

OFFICIAL COMPETITION THE PARTY Directed by Sally Potter Starring: Patricia Clarkson, Bruno Ganz, Cherry Jones, Timothy Spall, Emily Mortimer, Cillian Murphy and Kristen Scott Thomas. The Party is a comedy wrapped around a tragedy. It starts as a celebration and ends with blood on the floor.