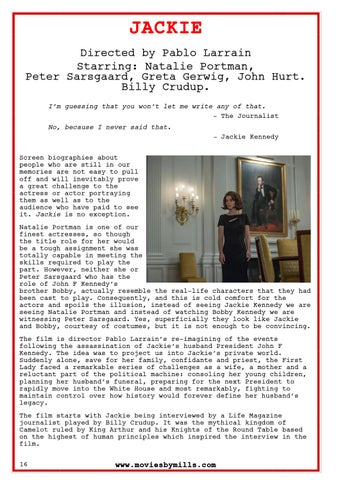 JACKIE Directed by Pablo Larrain Starring: Natalie Portman, Peter Sarsgaard, Greta Gerwig, John Hurt. Billy Crudup. I’m guessing that you won’t let me write any of that. - The Journalist No, because I never said that. - Jackie Kennedy Screen biographies about people who are still in our memories are not easy to pull off and will inevitably prove a great challenge to the actress or actor portraying them as well as to the audience who have paid to see it. Jackie is no exception. Natalie Portman is one of our finest actresses, so though the title role for her would be a tough assignment she was totally capable in meeting the skills required to play the part. However, neither she or Peter Sarsgaard who has the role of John F Kennedy’s brother Bobby, actually resemble the real-life characters that they had been cast to play. Consequently, and this is cold comfort for the actors and spoils the illusion, instead of seeing Jackie Kennedy we are seeing Natalie Portman and instead of watching Bobby Kennedy we are witnessing Peter Sarsgaard. Yes, superficially they look like Jackie and Bobby, courtesy of costumes, but it is not enough to be convincing.

The film is director Pablo Larrain’s re-imagining of the events following the assassination of Jackie’s husband President John F Kennedy. The idea was to project us into Jackie’s private world. Suddenly alone, save for her family, confidante and priest, the First Lady faced a remarkable series of challenges as a wife, a mother and a reluctant part of the political machine: consoling her young children, planning her husband’s funeral, preparing for the next President to rapidly move into the White House and most remarkably, fighting to maintain control over how history would forever define her husband’s legacy. The film starts with Jackie being interviewed by a Life Magazine journalist played by Billy Crudup. It was the mythical kingdom of Camelot ruled by King Arthur and his Knights of the Round Table based on the highest of human principles which inspired the interview in the film. 16