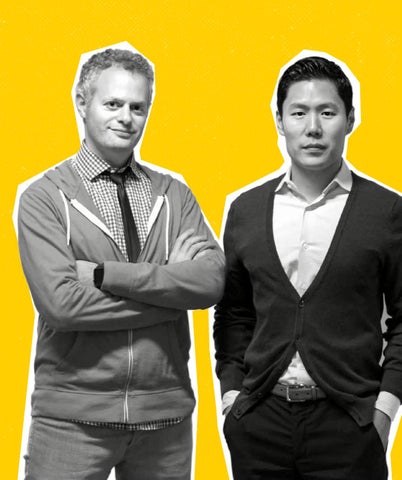 WORK. NOW. LOCALLY. AJ Brustein ’98 and Yong Kim ’96 are helping people to find work – whenever, wherever and for whomever they want – and companies to fill immediate needs with great people doing a great job, all within a moment’s notice. BY DOU G K IL EY

omething I love about Brewster graduates is the creativity and originality that shows in their life stories. Like Brewster, its graduates make a unique stamp on the world. During a trip to San Francisco to visit with current families, education consultants, and alumni, I had the opportunity to visit the home base of Wonolo – the entrepreneurial endeavor of AJ Brustein ’98 and Yong Kim ’96. I thought I had a pulse on technology. I am adept at all things laptopish, and I have even used Uber. In San Francisco my lack of technological experience showed in plain view, and I quickly realized that in the race for technology innovation, I was like a political candidate – overall fairly capable but currently trying to dress the part. Outside a coffee shop, I dialed in my third Uber ever. I tried to look like this was something I do all the time, but I’m guessing I looked more like my grandfather staring ever closer at the Polaroid snapshot, his nose three inches from the photo. (Yes, my nose was three inches from my screen staring at the little car icon coming for me.) How did two Brewster graduates go from the lakes and mountains of central New Hampshire, to dense urban environments in Asia and then to the eclectic islands of entrepreneurial pursuit in San Francisco? FROM KOREA TO THE SHORES OF LAKE WINNIPESAUKEE I was a new instructional support teacher at Brewster when I first met Yong Kim. He was an intense senior who did not smile. Rumors began spreading in the middle of the year that he had applied to the University of Chicago. His acceptance was an early indicator to me of what Brewster graduates were capable of. Having re-connected with him over the past few months has shown me he is capable of far greater than graduating from a highly competitive university. Like many students coming to Brewster from foreign countries, Yong faced challenges incomprehensible to most of his classmates. From the seemingly simple task of navigating unfamiliar meals in the dining hall to contributing at weekly dorm meetings, Yong worked tirelessly to learn English and became an intent listener. A tremendous amount of self-reliance is required of students coming from far away. Korean students in particular were expected to exhibit total self-reliance and embrace the steep learning curve that comes with living and studying in a foreign country.

While at Brewster, Yong was tempted to return to his loving family in Korea, but like many innovators and entrepreneurs, challenge (and sometimes failure) is the goal. After his undergraduate studiesin Chicago, Yong returned to New England to continue his education at Harvard where he earned both a master’s in statistics and an MBA. He then headed to Wall Street where he started a career in technology investment banking with Deutsche Bank. Here he helped companies raise capital and advised them in the process of building a financially sound business. Then in 2013 an opportunity with Coca-Cola’s “Founders” program presented itself. FROM THE SHORES OF LAKE WINNIPESAUKEE TO JAPAN AJ Brustein took a circuitous route to Wonolo. After taking a gap year in 1998–1999, AJ began his post-secondary education at Boston College. In that first year, AJ remained connected to Ippei Takahashi ’98 who was in school in Japan. Ippei convinced AJ to spend not just one year abroad but two. AJ had been scheduled to go to Spain, but Japan proved to be more enticing to him than Spain. AJ worked on his Japanese language skills while studying at Sophia University in Tokyo before returning to Boston College to finish his bachelor’s degree. It’s likely that the innovative environment in Japan started fermenting the seeds of AJ’s future as an innovator himself. He worked briefly with American Tobacco before moving over to CocaCola around 2006 where he worked in brand marketing. By spring 2013, AJ’s success at Coke had earned him a spot in the company’s “Founders” program. Like many global companies, Coca-Cola is finding a place for itself in the start-up economy as a requisite exercise in survival. In describing the

â&amp;#x20AC;&amp;#x153;The work that goes into maintaining a job is unnecessary if the job market is flexible. All that matters is that workers perform well on the job.â&amp;#x20AC;?

The Wonolo app helps fulfill and oﬀer thousands of employment opportunities a day.

relationships, resources, and reach – all before they create a start-up, with Coca-Cola as the lead backer, eventually becoming a minority shareholder. With the backing of one of the world’s largest private employers, all AJ needed now was a co-founder.

advisors in different divisions of Coke. The purpose is to tackle major problems faced by the different divisions of Coke worldwide. Ideally, other industries with the same challenges then would be able to adapt the “fix” to their business with the help of the new start-up. The huge advantage for the entrepreneurial co-founders is that they have access to Coke’s business resources – their

THE BREWSTER CONNECTION The night before Yong’s formal interview for a co-founder position, AJ and Yong met at the Hard Rock Cafe in Atlanta. It was over dinner that Yong reviewed his list of academic credentials: Harvard University, University of Chicago, and a boarding school in central New Hampshire – Brewster Academy. A skeptical AJ thought the Brewster reference might be bait. After sharing anecdotes about Maria Found’s superior teaching ability, however, AJ knew the two had in fact attended the same boarding school in the Lakes Region of New Hampshire – Brewster Academy! AJ credits Brewster with cultivating his competitive drive. “At Brewster I had great teachers and realized school could be a competition. I don’t know why I didn’t learn that before Brewster. At home I

didn’t care, but at Brewster I became competitive,” he explained. “I think Brewster should try to make that happen as much as possible.” WORK.NOW.LOCALLY. Once on board as co-founders, AJ and Yong set out to find a workplace solution for whom they saw as the most in-demand worker profile in the workforce today. With nearly three-quarters of a million employees in roughly 200 countries, Coke needed a way to better manage unpredictability. “The solution to unpredictability is flexibility,” according to AJ. He continues, “How do you make flexibility? You democratize work … the work that goes into maintaining a job is unnecessary if the job market is flexible. All that matters is that workers perform well on the job.” AJ and Yong’s solution would eventually become Wonolo (Work. Now. Locally.), a virtual on-demand staffing company charged with hiring and supplying some of the most sought-after members of today’s labor force: warehouse and delivery personnel, merchandisers, and event and administrative staff. While workers with these profiles are in demand, they also are at the mercy of a modern economy that ebbs and flows quickly. This is where AJ Brustein, COO, and Yong Kim, CEO, believe Wonolo stands out. An important dimension of Wonolo is its mission to help match new millennium workers with the new millennium landscape in the workforce. Yes, benefits and labor protection are as important and complex as ever. Similarly, companies like Wonolo that understand those two elements are as important as ever. Both alumni concede Wonolo is designed for a wide range

of workers: a focused teen looking for supplemental work opportunities, a recent college graduate wanting a flexible schedule, a stayat-home parent, or a retiree – all of these profiles can and do benefit from the design and implementation of Wonolo. And companies need these temporary workers. A base description of this creation could be the Uber of temp agencies, yet that would not be accurate. Uber has forever transformed the taxi industry while Wonolo is transforming temporary work placement agencies, but Wonolo differs in subtle and important ways from Uber. Through their on-demand staffing platform, Wonolo provides “Wonoloers” – talent – to businesses that need to fulfill hourly or daily jobs in minutes. There are tens of thousands of Wonoloers and more than 400 companies across the nation that utilize Wonolo, according to Yong, who works in Wonolo’s San Francisco headquarters along with 27 employees or “members”. Like any entrepreneurial endeavor, there is competition for this market. TaskRabbit and Fancy Hands are two competitors that are working to change the face of temp work. What sets Wonolo apart from these other companies, however, is its purpose. Wonolo is not attempting to find permanent work for Wonoloers. Several times in our discussion AJ and Yong referenced the unpredictability of supply and demand in the retail and service industry. As a result, distributors and companies of all stripes find themselves unable to sustain optimum commercial success because of staffing shortages or excess. This is where Wonolo shines. With their legions of carefully vetted Wonoloers, they can fill specific personnel needs in a matter of minutes

rather than days or weeks, the latter the domain of more traditional temp agencies. Wonolo shows signs of the “gig economy” – an environment where independent workCOMPANIES across the nation ers are hired by utilize Wonolo. companies for temporary, short-term employment – but with heaping doses of the Brewster Principle. As I have gotten to know Yong, AJ, and Wonolo, it is an inspiration to see Brewster Academy alumni building a company that has as its core philosophy the tenets of the Brewster Principle. AJ clarifies: “Wonoloers have certain character traits – the five P’s – punctual, prepared, polite, professional, and positive.” It is safe to say their former Headmaster David Smith might have considered those suitable as a Brewster Principle! By their nature, boarding school environments promote independence, self-reliance, and diversity and can foster unknown strengths and provoke passion in young people. However, I like to think the story of Wonolo is a uniquely Brewster story. AJ and Yong would be successful anywhere they ventured, but it takes the environment of Brewster Academy to create something as collaborative and forward thinking as Wonolo. / BA /

Published in the Fall 2016 edition of Brewster, the Magazine 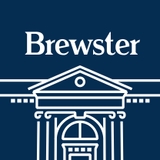