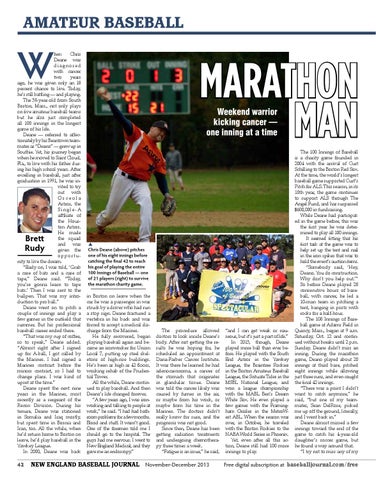 hen Chris Deane was diagnosed with cancer two years ago, he was given only an 18 percent chance to live. Today, he’s still battling — and playing. The 38-year-old from South Boston, Mass., not only plays on five amateur baseball teams but he also just completed all 100 innings in the longest game of his life. Deane — referred to affectionately by his Beantown teammates as “Deano” — grew up in Southie. Yet, his journey began when he moved to Saint Cloud, Fla., to live with his father during his high school years. After excelling in baseball, just after graduation in 1991, he was invited to try out with Osceola Astros, the Single-A affiliate of the Houston Astros. He made the squad and was given the opportunity to live the dream. “Early on, I was told, ‘Grab a case of bats and a case of tape,” Deane said. “Today, you’re gonna learn to tape bats.’ Then I was sent to the bullpen. That was my introduction to pro ball.” Deane went on to pitch a couple of innings and play a few games in the outfield that summer. But his professional baseball career ended there. “That was my cup of coffee, so to speak,” Deane added. “Almost right after I signed up for A-ball, I got called by the Marines. I had signed a Marines contract before the minors contract, so I had to change plans. I was kind of upset at the time.” Deane spent the next nine years in the Marines, most recently as a sergeant of the Recon Division. During his tenure, Deane was stationed in Somalia and Iraq mostly, but spent time in Bosnia and Iran, too. All the while, when he’d return home to Boston on leave, he’d play baseball in the Yawkey League. In 2000, Deane was back

Chris Deane (above) pitches one of his eight innings before catching the final 42 to reach his goal of playing the entire 100 Innings of Baseball — one of 21 players (right) to survive the marathon charity game. in Boston on leave when the car he was a passenger in was struck by a driver who had run a stop sign. Deane fractured a vertebra in his back and was forced to accept a medical discharge from the Marines. He fully recovered, began playing baseball again and became an ironworker for Union Local 7, putting up steel skeletons of high-rise buildings. He’s been as high as 42 floors, working rehab of the Prudential Tower. All the while, Deane continued to play baseball. And then Deano’s life changed forever. “A few years ago, I was ironworking and talking to people at work,” he said. “I had had bathroom problems for a few months. Blood and stuff. It wasn’t good. One of the foremen told me I should go to the hospital. The guys had me nervous. I went to New England Medical, and they gave me an endoscopy.”

The procedure allowed doctors to look inside Deane’s body. After not getting the results he was hoping for, he scheduled an appointment at Dana-Farber Cancer Institute. It was there he learned he had adenocarcinoma, a cancer of the stomach that originates in glandular tissue. Deane was told the cancer likely was caused by fumes in the air, or maybe from his work, or maybe from his time in the Marines. The doctors didn’t really know for sure, and the prognosis was not good. Since then, Deane has been getting radiation treatments and undergoing chemotherapy three times a week. “Fatigue is an issue,” he said,

“and I can get weak or nauseous, but it’s just a part of life.” In 2013, though, Deane played more ball than ever before. He played with the South End Astros in the Yawkey League, the Braintree Rockies in the Boston Amateur Baseball League, the Scituate Tides in the MSBL National League, and won a league championship with the MABL Ben’s Dream White Sox. He even played a few games with the Framingham Orioles in the MetroWest ABL. When the season was over, in October, he traveled with the Boston Rockies to the NABA World Series in Phoenix. Yet, even after all this action, Deane still had 100 more innings to play.

The 100 Innings of Baseball is a charity game founded in 2004 with the arrival of Curt Schilling to the Boston Red Sox. At the time, the world’s longest baseball game supported Curt’s Pitch for ALS. This season, in its 10th year, the game continues to support ALS through The Angel Fund, and has surpassed $600,000 in fundraising. While Deane had participated in the game before, this was the first year he was determined to play all 100 innings. It seemed fitting that his first task at the game was to help set up the tent and nail in the iron spikes that was to hold the event’s auction items. “Somebody said, ‘Hey, Deano. You do construction. Why don’t you help out.’” So before Deane played 28 consecutive hours of baseball, with cancer, he led a 10-man team in pitching a tent, banging in posts with rocks for a half-hour. The 100 Innings of Baseball game at Adams Field in Quincy, Mass., began at 9 a.m. Saturday, Oct. 12 and continued without breaks until 2 p.m. Sunday. Deane didn’t miss an inning. During the marathon game, Deano played about 20 innings at third base, pitched eight innings while allowing just three runs, and even caught the final 42 innings. “There was a point I didn’t want to catch anymore,” he said, “but one of my teammates, Sean DelRose, picked me up off the ground, literally, and I went back in.” Deane almost missed a few innings toward the end of the game to catch his 4-year-old daughter’s soccer game, but he found a way around that. “I try not to miss any of my

daughter’s soccer games, and Callan had a game Sunday morning. If I was going to miss her game, I wanted her to be a part of my game.” And she was, showing up bright and early Sunday morning for a photo-op with her dad. For Deane’s efforts, he earned game co-MVP, sharing the honor with Tom Trull of the Yawkey League’s Al Thomas Athletics, who also had caught a kneebuckling number of innings. The 100 Inning game ended just hours before the New England Patriots would stage a dramatic comeback against the New Orleans Saints, and David Ortiz would later display his own postseason heroics with a grand slam against the Detroit Tigers in the ALCS. “I missed it all,” he said. “The inside of my eyelids caught the Pats game, and I fell asleep the rest of the way while my girlfriend was walking the dog.” When Deane awoke Monday, he was still recovering. “I was a disaster. My quads were killing me,” he said. “I ended up going shopping with my girlfriend, Lindsey, at Target. I got around using one of those scooters that old people use. Lindsey wouldn’t be seen with me in the store. It took me until Tuesday to feel normal again.” Just in time for his next chemo session at Dana Farber. “To me, 100 innings was a goal,” Deane said. “At the beginning, it was just a game. I wanted to win. By the end, for the 20 guys who actually went the distance, it was about the cause. Everybody had a common goal. You formed a bond that you didn’t have before that’ll stick with you. I’ll always remember the guys who played all 100 innings. “Baseball is the only place that don’t think of anything other than baseball. When you’re on the field, everything is just fine. “I haven’t beaten it yet, but now I’m told I have up to a 90 percent chance of living, and cancer free.” Brett Rudy is the founder of the Boston Amateur Baseball Network. @bostonbaseball feedback@baseballjournal.com 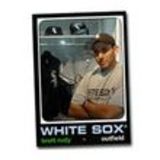 When Chris Deane was diagnosed with cancer two years ago, he was given only an 18% chance to live. Today, he’s still battling — and playing...

When Chris Deane was diagnosed with cancer two years ago, he was given only an 18% chance to live. Today, he’s still battling — and playing...