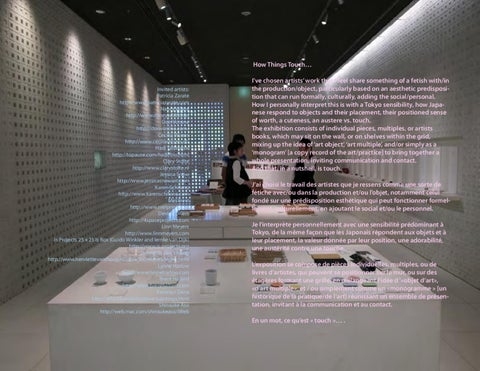 These things that may sit on the wall, on a table, draw attention not only unto themselves but also in proximity, of ideas, of soothers and disquietude: two grids on tangential walls, another formed by a mass of white, tabletops bunched together, anticipate a social meeting of sorts, like-minded, or in local disparity, objects intertwine ideas, engage an audience that may lead them, us, to a precipice of the inexorable… a spree, a want, desire, an enchanted moment with what is there, a champagne bubble, a twist of color, an abstract motif turned clock tower, some things something suggested… other times not… shiny surfaces, bars of color, dingle dangles that pull on the psychological purse, strings… these but a few of my favorite things… Touch is a meeting place, not always bound by the physical, though often unleashed via the temporal… a gettogether, a conversation, where we can touch.

touch is an exhibit comprised of artists whose focus is on abstraction and nonobjective visual language. The project began as an exhibition at Bus-dori in Tokyo, 2008. The artistsâ&#x20AC;&#x2122; processes and tenets have in common a simple approach to material and form - engaging a particular and personal language, and spatial sense. They hail from: London, Amsterdam, Tokyo, San Francisco, Santa Fe, Washington DC, upstate New York, and New York City.

Karen Schifanoâ&#x20AC;&#x2122;s oil on panel and canvases usually hold no more than a background color, on top of this is an outline of a shape. With such explicit means Schifano creates a complex spatial reading while drawing attention to material, mark, and texture. Similarly Mel Prest draws mark and material together to create a tension between what is and what is being suggested. Here a buzz of lines running close to each other provide space and form as a chimera: The effect is both meditative and explosive to the eye.

Tom Benson employs pigment and material and sometimes-mechanical process to create markers that energize space. Often the read is one of simple quiet, though process appears important, how a piece is made and in the context it is seen. Clary Stolteâ&#x20AC;&#x2122;s paintings are processâ&#x20AC;&#x201C;they show how a painting is made, or how many the ways a painting can be interpreted. By utilizing materials seldom associated with painting, aluminum foil, hemorrhoid gel, or clear packaging tape Stolte surprises the viewer with simple deft beauty.

Patricia Zarate mixes the fleeting with austere: Thin lengths of wood are brightly painted, lean against the wall or are laid out on the floor. Alternativeltly thinly cut colored origami paper turn into colored balls that speak to an airiness and freshness of color existing almost objectless. Jessica Snow takes on the topsy-turvy often to bridge colors and styles that at first appear not to fit together. Snow also works with process. She starts with an idea, a method, and a number of colors, to then go about the process of laying down the paint in a seemingly logical though unpredictable fashion.

Process, body, and wavering line inform Linn Meyers â&#x20AC;&#x2122; work. On paper systems of lines and energy patterns bring to mind magnetic pulls and shifts. Attention to breathing, the body, and a relation to physicality inform them. Meyers creates in situ pieces that can be as large as 40ft taking weeks to complete. Devin Powersâ&#x20AC;&#x2122; myriad of lines creates patterns and worlds within worlds. They are more geometrically based than Meyersâ&#x20AC;&#x2122;. Their similarity is in the powerful singularity that needs to be engaged to get a work done. Meyers mentions the gentle power of balance and rebalance. Powers talks of the terrifying beauty that space has to offer.

Hadi Tabatabai is a carpenter of line, most often using a grid as face. They remind both in craftsmanship and simplicity Japanese screens, â&#x20AC;&#x2DC;shojiâ&#x20AC;&#x2122;. Tabatabai offers his quiet though intriguing process, construction, and relief. Lynne Harlow maps the ephemeral by paying particular attention to the material she is using. By making the slightest of change Harlow invigorates a space with both a personal touch and architectural understanding. Placement is important to Harlow, as is material and the color that releases from it.

Nancy White makes use of the flip between two and the three dimensional with painted metal or paper construction. They are ostensibly paintings that hold more than the usual frontal focus. Small almost monochrome paintings, mounted on either aluminum of heavy gauge board, bedazzle the eye when you get up close to them. Shinsuke Asoâ&#x20AC;&#x2122;s collages, visual histories, come from everyday experience. Aso collects and carefully preserves material he finds on the streets of New York City. His visual lexicon harkens back to his childhood in urban Japan; odd shapes may refer to monsters or strange artifacts. These also function on a purely formal level, and the two become intermixed.

In Brent Hallard’s small paintings on metal, line and color work to create spatial ambiguities that share some affinity with minimalism, and another with popular culture. The illusionist space he is working with is obvious but never conclusive. There is a similar incongruence within the work of Henriette van’ t Hoog. Van’ t Hoog’s colors flare onto the wall given that she paints the backs of her objects with Fluorescent paint. This strange afterimage creates a unique habitat for each piece.

Kasarian Daneâ&#x20AC;&#x2122;s paintings on aluminum or works on paper hold stripes, areas of color, that calibrate. Their structural arrangement can be read, or likened to, a visual poem or song. Also on aluminum, and steel, Cecilia Vissers looks to be working very much with painting. Her work is flat. But it is also heavy. And weight and thickness of each piece she makes tells us firstly about the material, and then how it speaks. Diagonals and shifting space, with often the core of the painting black, hallmarks the work of Don Voisine. The paintings are colorful and calibrated taking you out of the limited dimensions of their physical lay.

The scale of the exhibition is envisaged as â&#x20AC;&#x2DC;small worksâ&#x20AC;&#x2122; set out in a physical space so each piece breathes and interconnects, which succeed in articulating possibilities of the indefinable; as something we can touch. 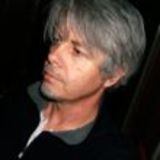