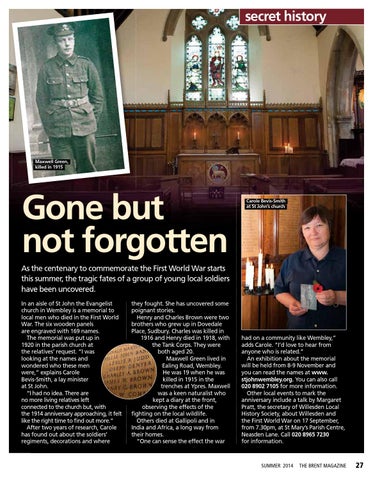 Gone but not forgotten

As the centenary to commemorate the First World War starts this summer, the tragic fates of a group of young local soldiers have been uncovered. In an aisle of St John the Evangelist church in Wembley is a memorial to local men who died in the First World War. The six wooden panels are engraved with 169 names. The memorial was put up in 1920 in the parish church at the relatives’ request. “I was looking at the names and wondered who these men were,” explains Carole Bevis-Smith, a lay minister at St John. “I had no idea. There are no more living relatives left connected to the church but, with the 1914 anniversary approaching, it felt like the right time to find out more.” After two years of research, Carole has found out about the soldiers’ regiments, decorations and where

they fought. She has uncovered some poignant stories. Henry and Charles Brown were two brothers who grew up in Dovedale Place, Sudbury. Charles was killed in 1916 and Henry died in 1918, with the Tank Corps. They were both aged 20. Maxwell Green lived in Ealing Road, Wembley. He was 19 when he was killed in 1915 in the trenches at Ypres. Maxwell was a keen naturalist who kept a diary at the front, observing the effects of the fighting on the local wildlife. Others died at Gallipoli and in India and Africa, a long way from their homes. “One can sense the effect the war

had on a community like Wembley,” adds Carole. “I’d love to hear from anyone who is related.” An exhibition about the memorial will be held from 8-9 November and you can read the names at www. stjohnwembley.org. You can also call 020 8902 7105 for more information. Other local events to mark the anniversary include a talk by Margaret Pratt, the secretary of Willesden Local History Society, about Willesden and the First World War on 17 September, from 7.30pm, at St Mary’s Parish Centre, Neasden Lane. Call 020 8965 7230 for information. 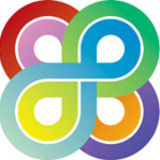