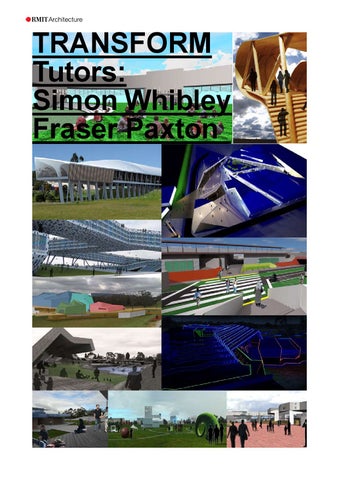 The transformation of existing suburban shopping centres to urban centres is intended as a key outcome of the Melbourne 2030 planning strategy. This alters the once exclusively commercial areas of the suburbs to much more diverse combinations of housing, employment, recreational and civic functions. Such a radical transformation is currently being undertaken by Knox City Council through the Knox Urban Design Framework Transform: Design Studio Themes In Transform, architectural processes of transformation are to be used to frame students investigations. Changes of use, of building shape, and of material create exciting and disturbing newness. The focus of the studio was the Lewis Park flood retarding basin, an large under used areas of parkland at the rear of the shopping centre. The projects produced by the students investigated a number of different futures for Lewis park, encompassing recreational, residential, civic and educational projects Site research and design workshops were held in conjunction with RMIT Public Art Students and invited guests from the Knox City Council. Transform is part of an is an ongoing studio research project that is strongly supported by the Knox City Council. An exhibition of the studio work will is planned for 2009, as well as a further studio project.

This work was created by a hard working passionate group of students who participated in the studio and were responsible for the production of great work throughout the semester. They are: Mark Hocking, Luca Lana, Frank Wirawan, Queenie Chong, Benjamin Clements, Jason Tam,

Initially, students undertook group site research that focussed on an aspect of the City of Knox, its cultural, economic and recreational activity, together with focussed site research within the Knox Central Shopping Centre. Students then produced a series of individual esquisse projects within this site, utiliz-

ing different investigations of transformation from architectural, literary and artistic sources. By reflecting on both the research and esquisse projects, these initial investigations were developed by each student into their own brief upon their own site for their final project.

The master plan was the main driver in this proposal. Deemed as being the wrong way around, transport interchange and civic function were removed and re placed behind the site towards the greener more pedestrian friendly parts. Initially this project was a well designed strategic master plan then became more

focused on to one element - the odd carpark with a 5 m floor to ceiling. The carving took place in careful consideration of the existing structure. The material qualities introduced were of a 24 hour time scale and reflect the work of Donald Judd.

This project demonstrates a lack of interface to the retarding basin as it exists at the moment. On a master planning level the sophistication comes in re routing the public transport system to the back of site. By doing this it becomes a catalyst for other activity and injects sudden life to the area. Program

includes retail, outdoor recreation and subsequent passage and awareness of the retarding basin and wetlands behind.

Initially the proposal for a water treatment center was considered too radical, but, with proof of itâ&#x20AC;&#x2122;s potential and viability the project progressed into a 400m long programmed deck space. The topography lifts and fold, extents and stretches to house alternate education, recreation and civic function. Reminiscent

of Yokohama ferry terminal in structure - the project was broken down section by section in order to gain understanding and control of the resultant space. A solid project was the result.

Tied into the site by lines extending from thew surrounding this project seeks to re create a Rembrants, or community part of knox. The site lines drawn out extend through and up to become a built envelope for such things as conference rooms, cafe, outdoor staged area as well as cascading seating. Colour de-

fines what the elements are drawn from as a way of demarcating the architectural origins of the proposal. The project operates over different time scales, day / night, and through the different conditions of flood and dry.

As the main connection between Burwood highway and the retarding basin, Melbourne Street was an obvious location for something that connects through to the wetlands area. The sculpted form of this project reflects the idea of surface wearing over time through constant use. The bike path is diverted

through the facade of the building into the shopping center thus creating a sophisticated active facade treatment where the user who, interacting with the project, becomes part of it as well. The architecture houses a gallery and library as well as the connections upon multiple axes. 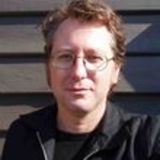