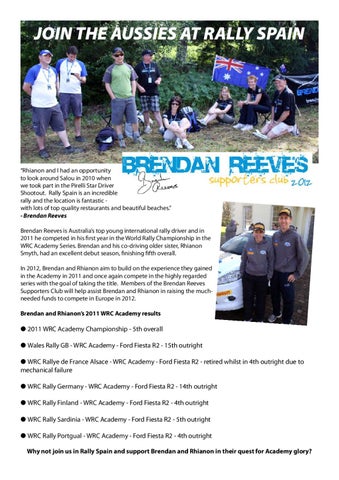 JOIN THE AUSSIES AT RALLY SPAIN

“Rhianon and I had an opportunity to look around Salou in 2010 when we took part in the Pirelli Star Driver Shootout. Rally Spain is an incredible rally and the location is fantastic with lots of top quality restaurants and beautiful beaches.” - Brendan Reeves Brendan Reeves is Australia’s top young international rally driver and in 2011 he competed in his first year in the World Rally Championship in the WRC Academy Series. Brendan and his co-driving older sister, Rhianon Smyth, had an excellent debut season, finishing fifth overall. In 2012, Brendan and Rhianon aim to build on the experience they gained in the Academy in 2011 and once again compete in the highly regarded series with the goal of taking the title. Members of the Brendan Reeves Supporters Club will help assist Brendan and Rhianon in raising the muchneeded funds to compete in Europe in 2012. Brendan and Rhianon’s 2011 WRC Academy results

ans of Brendan Reeves, and rallying in general, are invited to participate in a unique World Rally Championship experience - the Brendan Reeves Supporters Club Tour to Rally Spain, organised by RallySport Magazine. The tour will give participants the chance to watch Reeves, and his codriving sister, Rhianon Smyth, compete in the sixth and final round of the 2012 World Rally Championship (WRC) Academy. Rally Spain is a mixed surface event, based out of the city of Salou, about an hour and a quarter south west of Barcelona. The tour will start in Barcelona on Wednesday, November 7, and conclude back in Barcelona on Monday, November 12. Rally Spain-Catalunya will be the final round of the 2012 WRC, PWRC, SWRC and WRC Academy, so expect a large quality entry, some fantastic action on the stages and some equally exciting after-rally parties as the season comes to a close under the Autumn sunshine of the Costa Dorada! With the likelihood of a number of championship titles to be decided at the final event, this is one rally definitely worth attending.

Brendan and Rhianon will contest their second WRC Academy season after finishing a commendable fifth outright in 2011 in their first full international season. This year they return with their eyes on the Academy title. The focus for the Rally Spain tour will be to follow Brendan and Rhianon and support them in their quest to win the Academy class at Rally Spain, as well as having the opportunity to see the WRC, PWRC and SWRC crews in action. Brendan and Rhianon will meet with the group on a number of occasions throughout the tour, subject to their time schedule. Tour participants will also have the opportunity to watch the likes of Sebastien Loeb, Petter Solberg, JariMatti Latvala and Mikko Hirvonen in action on one of the WRCâ&#x20AC;&#x2122;s most famous, and popular, rallies. The 5 night/6 day tour starts and finishes in Barcelona and includes twin share accommodation at the 4 star Regina Gran Hotel; buffet breakfast and dinner daily; all land transport; all Rally Spain tickets and rally passes; official programme and maps; services of a RallySport Magazine tour guide throughout; Brendan Reeves Supporters Club cap; pre-event meet and greet

with Brendan and Rhianon*; visit to Brendan and Rhianon at Service Park*; access to Rally Travel’s Welcome evening with the WRC stars and Charity Auction; VIP Tour of Ford World Rally Team at the Service Park; visit to rally afterparties. Tour cost: The tour is priced at just $1750 per person twin share (land only) for Brendan Reeves Supporters Club Members, and $1850 per person twin share for non-members (includes $100 joining fee and Supporters membership pack). Single supplement - additional $100. Triple share rooms available on request (subject to availability). *Subject to their availability

Arrival into Barcelona. Transfer from airport to Salou at 5pm; Welcome evening with WRC stars; Meet and greet with Brendan and Rhianon;

Mon 12 Nov Transfer from Salou to Barcelona airport at approximately 10am Accommodation Regina Gran Hotel, Salou is a 4 star hotel with two swimming pools, gym, sauna, air-conditioned rooms and is just a few minutes’ walk from the beach and the fabulous Port Aventura theme park. Extra nights can be booked at Hotel Regina before and after the tour at our special discounted rate - please enquire for details.

Port Aventura Come and enjoy one of the most symbolic theme parks in Spain. In Port Aventura you will discover a theme park full of all kinds of fun. The six areas of the theme park will let you discover new and wonderful worlds with magnificent shows and breathtaking magical rides for all ages. From the tallest and fastest roller coasters in Europe to the smaller rides that parents and children can enjoy together in the magical family area of SÈsamoAventura. Take advantage of the privileged location of the theme park in one of the best resorts in Catalonia, Spain, in the heart of the Costa Dorada. Nearby you’ll also find a wide variety of tourism, sports and relaxation thanks to the close proximity to Barcelona, three golf courses next to the theme park and the Beach Club overlooking the sea. Why not extend your stay in Salou and enjoy some time out at Port Aventura?

Validity: These terms and conditions are valid only for the Brendan Reeves Supporters Club Rally Spain Tour, November 2012. Prices: All pricing and tour information contained in this brochure is correct at the time of printing. We do, however, reserve the right to make amendments to tour itineraries, content and pricing should circumstances beyond our control make such changes necessary. Costs are based on a land only basis, commencing and terminating in Barcelona. Airfares are additional and are the responsibility of the traveller. Due to volatile global currency fluctuations, prices may change and are not guaranteed until payment in full has been received. In order to avoid price increases, we recommend you make your full payment as soon as possible. Credit card (Visa and Mastercard) payments incur a 1.5% fee. Payment Requirements: Brendan Reeves Supporters Club Rally of Spain Tour 2012; 6 days/5 nights - AU$1750 per person twin share for Club Members and AU$1850 per person twin share for Non-Members (ex Barcelona). A deposit of AU$500 per person is required upon booking together with the completed Booking Form. Final payment is due no later than September 7, 2012 and can be made in two installments; AU$625 by June 30 and AU$625 by September 7 ($725 for non members). Cancellations: In the event of cancellation prior to September 7, 2012, a $200 administration fee will be charged. No refunds apply for cancellation of bookings on/after September 7, 2012. Travel Insurance: Travel insurance is strongly recommended to cover you against loss of monies paid because of unavoidable cancellation, due to illness or other causes, personal baggage loss, medical expenses, etc. Please contact RallySport Magazine if you require assistance with purchasing Travel Insurance. Accommodation: Accommodation is based on a twin share basis. Single and triple rooms may be available on request. If travelling alone, you will be required to pay the single supplement of AU$100. Health Requirements & Travel Documents: Travellers must posses valid travel documents and those not holding an Australian passport may require an Australian Re-entry Permit. It is your responsibility to determine and comply with the health, visa and passport requirements that apply. Responsibility: RallySport Magazine and Rally Travel Ltd act only as agents, for the transportation companies, hotels, car operators and all other contractors/suppliers and therefore disclaim any responsibility or liability for any loss, damage, accident, change of schedule or other irregularities caused by or arising from, circumstances beyond our control. Itineraries: RallySport Magazine and Rally Travel Ltd reserve the right to alter the itinerary and/or substitute services with or without notice as a result of circumstances beyond our control or if found to be in the best interest of all concerned. e. & o.e.

RALLY OF SPAIN TOUR Wednesday, November 7 – Monday, November 12, 2012 DISCLAIMER EXCLUSION OF LIABILITY, RELEASE AND ASSUMPTION OF RISK MOTOR SPORT IS DANGEROUS In exchange for being able to attend or participate in the event, you agree: to release Rally Spain, Rally Travel Ltd, promoters, sponsor organisations, land owners and lessees, organisers of the event, their respective servants, officials, representatives and agents including RallySport Magazine (collectively, the “Associated Entities”) from all liability for your death, personal injury (including burns), psychological trauma, loss or damage (including property damage) (“harm”) howsoever arising from your participation in or attendance at the event, except to the extent prohibited by law; that Rally Spain and the Associated Entities do not make any warranty, implied or express, that the event services will be provided with due care and skill or that any materials provided in connection with the services will be fit for the purpose for which they are supplied; and to attend or participate in the event at your own risk. You acknowledge that: • the risks associated with attending or participating in the event include the risk that you may suffer harm as a result of: • motor vehicles (or parts of them) colliding with other motor vehicles, persons or property; • acts of violence and other harmful acts (whether intentional or inadvertent) committed by persons attending or participating in the event; and • the failure or unsuitability of facilities (including grand-stands, fences and guard rails) to ensure the safety of persons or property at the event. • motor sport is dangerous and that accidents causing harm can and do happen and may happen to you. • You accept the conditions of, and acknowledge the risks arising from, attending or participating in the event and being provided with the event services by Rally Spain and the Associated Entities.

I am travelling with (name) Do you have any special dietary requirements?

Please provide me with a quote for airfares

My preferred departure date from is Australia is from (city)

and my preferred return date is

from (city) Travel insurance is strongly recommended. Would you like to purchase Travel Insurance through RallySport Magazine?

I have read the attached Terms and Conditions and Disclaimer and enclose my deposit / full payment. Signed: 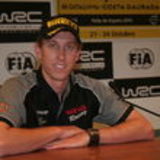