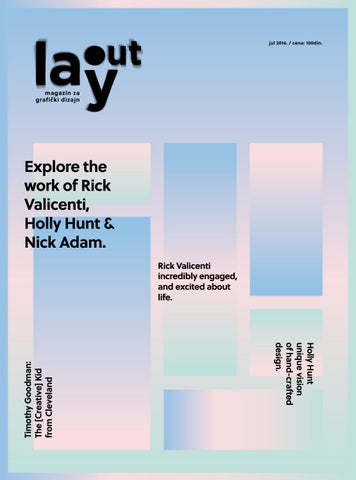 Matthew Hoffman is inspired by …

Rick Valicenti He brings it every time, is incredibly engaged, and you leave feeling so excited about life. He has the magical ability to remind you why you’re passionate about what you love. We made incredible art together, through a collaboration of our studios. Some really thought-provoking work came out of it. It was certainly more interesting for the process, beyond the destination.

We worked together to create an entire typeface from my classic font. There were plenty of Easter eggs, including that every letter had its own word. There was a wonderful laser cut word set, and limited-edition poster.

The project combined wood and laser cutting, specialty printing, font technology with a digital delivery. It was the entire package. The editions were one off, and snatched up quite quickly. It was a project well received by the design community, and was an incredible experiment, with a lovely keepsake to remember it by.

Rick Valicenti is inspired by two people this week. First…

It was hard for me to decide between Stanley Mouse (age 75) or Holly Hunt (age 73). Holly Hunt is my choice perhaps because I have known her for almost 30 years, and admire her unflinching pursuit of a unique vision of hand-crafted design. Excellence and perfection allude each of us, but Holly wakes each day trying, as she puts it, to “get it right.” I love that in her, and she inspires me to do the same. Holly’s lovely furniture and textile showrooms reside in major design market cities on three continents. Her design studio is in Chicago. I am choosing to select recent projects that represent my collaboration with Holly.

On a recent photo shoot in the Hamptons, Holly was game when I suggested we put the dining room setting in the field under a canopy of trees. To activate the image, the home owner’s guinea hens were released from their cage. Holly was delighted as any creative person should be! When her son saw the ad in Architectural Digest, he thought she had designed “magic” chairs. We all assumed that everyone would know that the chairs were cantilevered on a base buried in grass. Minutes before the Uber arrived to take me to meeting with Holly, the toner ran out on the last printout I was to present. It should have been a silver-gray sofa on a black background, but instead looked like a solarized gray sofa on a white background. Holly loved it and asked me to print this magical image of her Waterloo Sofa just as it was. With a bit of hi-res modification, the Epson mistake became the focal point of her most recent collection catalog. To preserve that moment of delight, I asked the second-shift pressman to add gold dust to the UV fountain and sprinkle this image with Holly magic dust.

Nick’s best work lives on the street. He’s a muralist, an artist, a typographer, a strategist, and at the core, he is a designer. In a world assaulted by graphic excess and commercial seduction, the artifact Nick puts out there breaks through and always captures my attention. And, if I may, I am delighted he is my son-in-law.

Nick’s THIS ISN’T US protest campaign, cuts right to an emotional core. Punctuated with a flag and detailed with a new ligature, this tight three-word gothic lockup arouses “us” to our core beliefs. If a graphic can go toe to toe with the wanna-be autocrat, this work will surely take down today’s paper tiger candidate.

From my point of view, great designs leverage the familiar to forge a new functional message. Done right, the familiar+function can never ever be separated. Milton Glaser’s I Heart NY is case in point. While at Firebelly Design (and in conjunction with IDEO), Nick, along with Will Miller, made the indelible wordmark for Chicago’s DIVVY bike sharing program. He put it over the top by spelling the double-Vs with the familiar ubiquitous traffic motif identifying Chicago bike lanes. Tune in next time to see who inspires Nick Adam!

Timothy Goodman pushes the limits of what being a designer is. He’s not limited by traditional definitions. His website, www. tgoodman.com, doesn’t look or feel anything like a typical design firm website. There are no explanatory captions, no jargon about “strategy” or “how we help our clients achieve their goals.” It’s all images, and you just get it.

Sure, there are client projects like Time magazine covers and Oreo holiday packages that look like pillows you’d want to sleep with. But, look, there’s a video of Goodman kneeling on the floor during a Las Vegas trade show with a Sharpie in his hand, lettering a mural of Tupac Shakur lyrics. There he is leaving wallets with money on park benches all around New York City. And there he is leading the “Build Kindness Not Walls” protest in front of Trump Tower while the major networks broadcast it live.

And there he is, reaching down deep, telling his issues and fears to a relationship therapist and making content out of them. There he is confronting his biological father for the first time. It’s content that strikes a lot of chords with viewers and fans. For example, while everyone else was just talking about the new rules of dating in the age of Tinder and Snapchat, Goodman was broadcasting his experiences through www.40daysofdating. com, where (in case you haven’t heard or seen) he and designer Jessica Walsh dated and journaled about it for 40 days, with Walsh’s commentary on the left side of the page and Goodman’s on the right. This experiment gained 5 million unique visitors, worldwide press coverage, became a book, and was optioned for a feature film by Warner Brothers, which also reportedly acquired Goodman and Walsh’s life rights.

No wonder he speaks with such clarity and confidence. Yes, he’s perfected his “story” through talks and interviews, but there seems to be a real honesty, a fearlessness to dig deep and reveal the insecurities that plague us all, and that we’re usually too scared to talk about, much less make a website or book about. Goodman presents them publicly on custom websites that combine text, handlettering, drawings, photography, screen shots from Twitter feeds, video, music. Everything Goodman does—and there is just so much—seems to have ridiculously high production values, like the best cable network reality shows. At the same time, he writes, “Now that I’m getting older”—he’s 34—“I take vitamins, exercise, and go to sleep at 11 p.m.” How does he do it all? I met with him in the offices of Collins in New York’s Greenwich Village, where he rents studio space, to find out.

Tim, this is the “creativity” issue of HOW, so I’d like to begin with your definition of creativity. Is it inborn or can it be cultivated? Once you “have it,” do you have to keep working at it?

Life can be harsh, and we all need to do whatever it takes to get some pleasure out of it. That’s why we go to the movies, follow a band, root for a sports team, travel. And some of us make things. We all need something to distract us from the fragility of life. I don’t know where creativity comes from, but I do find that creative people seem to constantly chase “the new.” It’s like the first sip of a cold beer or the first date you go on with a girl who isn’t quite sure about you. I love that feeling between anxiety and excitement. 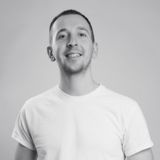