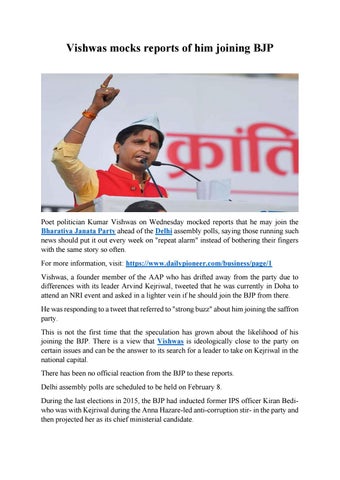 Poet politician Kumar Vishwas on Wednesday mocked reports that he may join the Bharatiya Janata Party ahead of the Delhi assembly polls, saying those running such news should put it out every week on "repeat alarm" instead of bothering their fingers with the same story so often. For more information, visit: https://www.dailypioneer.com/business/page/1 Vishwas, a founder member of the AAP who has drifted away from the party due to differences with its leader Arvind Kejriwal, tweeted that he was currently in Doha to attend an NRI event and asked in a lighter vein if he should join the BJP from there. He was responding to a tweet that referred to "strong buzz" about him joining the saffron party. This is not the first time that the speculation has grown about the likelihood of his joining the BJP. There is a view that Vishwas is ideologically close to the party on certain issues and can be the answer to its search for a leader to take on Kejriwal in the national capital. There has been no official reaction from the BJP to these reports. Delhi assembly polls are scheduled to be held on February 8. During the last elections in 2015, the BJP had inducted former IPS officer Kiran Bediwho was with Kejriwal during the Anna Hazare-led anti-corruption stir- in the party and then projected her as its chief ministerial candidate.

Her choice as the party's face, however, boomranged as the BJP lost badly and she was also defeated. https://www.dailypioneer.com/sports/page/1 - Poet politician Kumar Vishwas on Wednesday mocked reports that he may join the Bharatiya Janata...

https://www.dailypioneer.com/sports/page/1 - Poet politician Kumar Vishwas on Wednesday mocked reports that he may join the Bharatiya Janata...