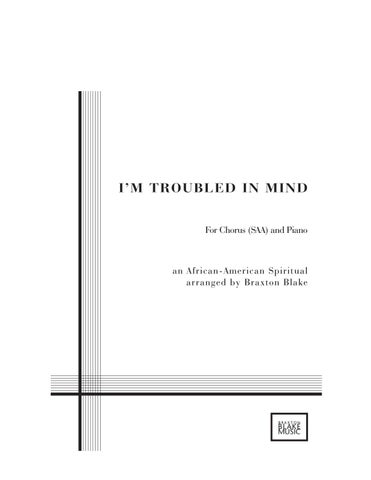 I’M TROUBLED IN MIND For Chorus SSA and Piano A

Braxton Blake was raised in Galveston, Texas where he first studied composition and theory with Francis J. Pyle. He then attended the University of Houston from 1972-1976, studying composition with Michael Horvit and Thomas Benjamin, with additional concentration in piano and conducting. He enrolled at the Eastman School of Music in 1976, where he studied composition with Samuel Adler, Warren Benson, and Joseph Schwantner. At Eastman, he served as music director of the Musica Nova Ensemble (1978-1979). He received the degrees Master of Music in 1979 and Doctor of Philosophy in 1990.

Mr. Blake has participated in various music festivals, including the Aspen Music Festival (1978), the Bayreuth Festival (1980), and the Dartington Festival, (1984, studies in composition with Peter Maxwell Davies and conducting with Diego Masson). While living in Stuttgart, he studied composition with Milko Kelemen at the Staatliche Musikhochschule from 1984-1986. His professional engagements include serving as music director for the Erick Hawkins Dance Company, New York (1981-1984), with which he toured extensively throughout the United States, as well as guest appearances with Ensemble Modern, Frankfurt, Musik Fabrik, Düsseldorf, the Stuttgart Philharmonic, the San Francisco Contemporary Music Players, the South German Radio Choir, the Contemporary Music Alliance Stuttgart, the Koechlin Ensemble, Ensemble 20, the Stuttgart Ballet, the Studio Ensemble Stuttgart, and Musica Nova Stuttgart. He has recorded extensively for the South German Radio and has recorded for Muza and for Col Legno recordings.

Mr. Blake’s commissions include those from the Sønderjyllands Symfoniorkester, Denmark (Four Songs), the Philharmonic Brass, Stuttgart (Brass Quartet), the Vail Valley Foundation, (Piece of Cake) the City of Mannheim (Saxophone Sonata), Ensemble 20 (Three Preludes), the Stuttgart Philharmonic (Viola Concerto), the City of Stuttgart (Octet), the West German Radio, Cologne (Creole Folksongs), the Stuttgart Ballet (Salome), and the John Cranko School of the Stuttgart Ballet (Alice in Wonderland). Recently, seven works of his have been recorded for broadcast and CD release by the Südwest Rundfunk (Baden-Baden) and both the Albany and Ars-Musici labels have released CDs of his music. His compositions are published by Theodore Presser and Columbia University Music Press. Mr. Blake is the recipient of the 2001 Wladimir and Rhoda Lakond Award from the American Academy of Arts and Letters.

An African-American spiritual for treble chorus (S.S.A.) and piano