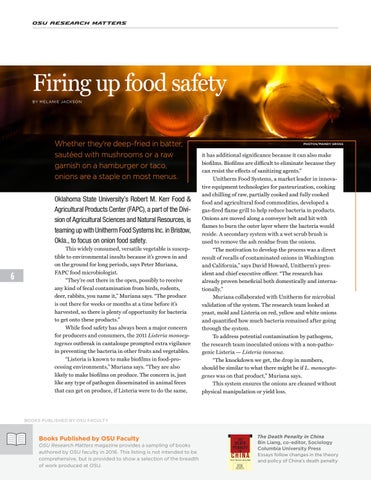 Whether they’re deep-fried in batter, sautéed with mushrooms or a raw garnish on a hamburger or taco, onions are a staple on most menus. Oklahoma State University’s Robert M. Kerr Food & Agricultural Products Center (FAPC), a part of the Division of Agricultural Sciences and Natural Resources, is teaming up with Unitherm Food Systems Inc. in Bristow, Okla., to focus on onion food safety.

This widely consumed, versatile vegetable is susceptible to environmental insults because it’s grown in and on the ground for long periods, says Peter Muriana, FAPC food microbiologist. “They’re out there in the open, possibly to receive any kind of fecal contamination from birds, rodents, deer, rabbits, you name it,” Muriana says. “The produce is out there for weeks or months at a time before it’s harvested, so there is plenty of opportunity for bacteria to get onto these products.” While food safety has always been a major concern for producers and consumers, the 2011 Listeria monocytogenes outbreak in cantaloupe prompted extra vigilance in preventing the bacteria in other fruits and vegetables. “Listeria is known to make biofilms in food-processing environments,” Muriana says. “They are also likely to make biofilms on produce. The concern is, just like any type of pathogen disseminated in animal feces that can get on produce, if Listeria were to do the same,

it has additional significance because it can also make biofilms. Biofilms are difficult to eliminate because they can resist the effects of sanitizing agents.” Unitherm Food Systems, a market leader in innovative equipment technologies for pasteurization, cooking and chilling of raw, partially cooked and fully cooked food and agricultural food commodities, developed a gas-fired flame grill to help reduce bacteria in products. Onions are moved along a conveyer belt and hit with flames to burn the outer layer where the bacteria would reside. A secondary system with a wet scrub brush is used to remove the ash residue from the onions. “The motivation to develop the process was a direct result of recalls of contaminated onions in Washington and California,” says David Howard, Unitherm’s president and chief executive officer. “The research has already proven beneficial both domestically and internationally.” Muriana collaborated with Unitherm for microbial validation of the system. The research team looked at yeast, mold and Listeria on red, yellow and white onions and quantified how much bacteria remained after going through the system. To address potential contamination by pathogens, the research team inoculated onions with a non-pathogenic Listeria — Listeria innocua. “The knockdown we get, the drop in numbers, should be similar to what there might be if L. monocytogenes was on that product,” Muriana says. This system ensures the onions are cleaned without physical manipulation or yield loss.

Books Published by OSU Faculty OSU Research Matters magazine provides a sampling of books authored by OSU faculty in 2016. This listing is not intended to be comprehensive, but is provided to show a selection of the breadth of work produced at OSU. 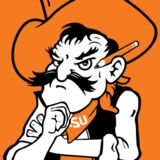