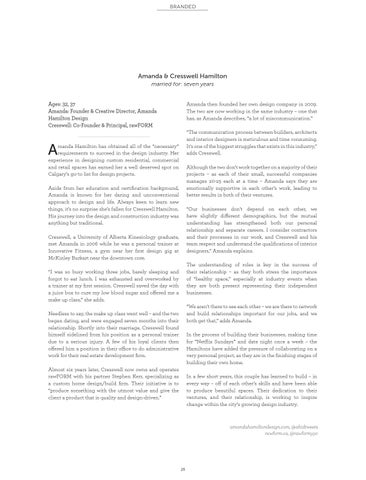 Amanda then founded her own design company in 2009. The two are now working in the same industry – one that has, as Amanda describes, “a lot of miscommunication.” “The communication process between builders, architects and interior designers is meticulous and time consuming. It’s one of the biggest struggles that exists in this industry,” adds Cresswell.

manda Hamilton has obtained all of the “necessary” requirements to succeed in the design industry. Her experience in designing custom residential, commercial and retail spaces has earned her a well deserved spot on Calgary’s go-to list for design projects.

Although the two don’t work together on a majority of their projects – as each of their small, successful companies manages 20-25 each at a time – Amanda says they are emotionally supportive in each other’s work, leading to better results in both of their ventures.

Aside from her education and certification background, Amanda is known for her daring and unconventional approach to design and life. Always keen to learn new things, it’s no surprise she’s fallen for Cresswell Hamilton. His journey into the design and construction industry was anything but traditional.

“Our businesses don’t depend on each other, we have slightly different demographics, but the mutual understanding has strengthened both our personal relationship and separate careers. I consider contractors and their processes in our work, and Cresswell and his team respect and understand the qualifications of interior designers,” Amanda explains.

Cresswell, a University of Alberta Kinesiology graduate, met Amanda in 2006 while he was a personal trainer at Innovative Fitness, a gym near her first design gig at McKinley Burkart near the downtown core.

The understanding of roles is key in the success of their relationship – as they both stress the importance of “healthy space,” especially at industry events when they are both present representing their independent businesses.

“I was so busy working three jobs, barely sleeping and forgot to eat lunch. I was exhausted and overworked by a trainer at my first session. Cresswell saved the day with a juice box to cure my low blood sugar and offered me a make up class,” she adds.

“We aren’t there to see each other – we are there to network and build relationships important for our jobs, and we both get that,” adds Amanda.

Needless to say, the make up class went well – and the two began dating, and were engaged seven months into their relationship. Shortly into their marriage, Cresswell found himself sidelined from his position as a personal trainer due to a serious injury. A few of his loyal clients then offered him a position in their office to do administrative work for their real estate development firm.

In the process of building their businesses, making time for “Netflix Sundays” and date night once a week – the Hamiltons have added the pressure of collaborating on a very personal project, as they are in the finishing stages of building their own home.

Almost six years later, Cresswell now owns and operates rawFORM with his partner Stephen Kerr, specializing as a custom home design/build firm. Their initiative is to “produce something with the utmost value and give the client a product that is quality and design-driven.”

In a few short years, this couple has learned to build – in every way – off of each other’s skills and have been able to produce beautiful spaces. Their dedication to their ventures, and their relationship, is working to inspire change within the city’s growing design industry. 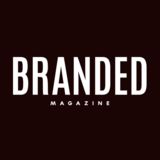