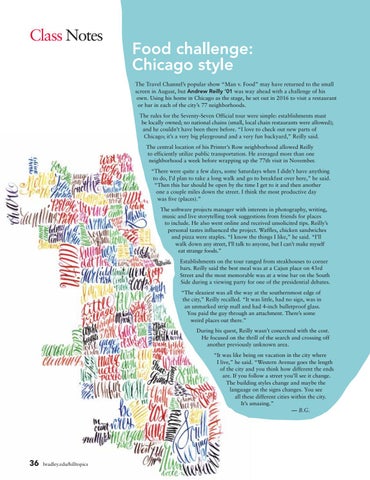 Food challenge: Chicago style The Travel Channel’s popular show “Man v. Food” may have returned to the small screen in August, but Andrew Reilly ’01 was way ahead with a challenge of his own. Using his home in Chicago as the stage, he set out in 2016 to visit a restaurant or bar in each of the city’s 77 neighborhoods. The rules for the Seventy-Seven Official tour were simple: establishments must be locally owned; no national chains (small, local chain restaurants were allowed); and he couldn’t have been there before. “I love to check out new parts of Chicago; it’s a very big playground and a very fun backyard,” Reilly said. The central location of his Printer’s Row neighborhood allowed Reilly to efficiently utilize public transportation. He averaged more than one neighborhood a week before wrapping up the 77th visit in November. “There were quite a few days, some Saturdays when I didn’t have anything to do, I’d plan to take a long walk and go to breakfast over here,” he said. “Then this bar should be open by the time I get to it and then another one a couple miles down the street. I think the most productive day was five (places).” The software projects manager with interests in photography, writing, music and live storytelling took suggestions from friends for places to include. He also went online and received unsolicited tips. Reilly’s personal tastes influenced the project. Waffles, chicken sandwiches and pizza were staples. “I know the things I like,” he said. “I’ll walk down any street, I’ll talk to anyone, but I can’t make myself eat strange foods.” Establishments on the tour ranged from steakhouses to corner bars. Reilly said the best meal was at a Cajun place on 43rd Street and the most memorable was at a wine bar on the South Side during a viewing party for one of the presidential debates. “The sleaziest was all the way at the southernmost edge of the city,” Reilly recalled. “It was little, had no sign, was in an unmarked strip mall and had 4-inch bulletproof glass. You paid the guy through an attachment. There’s some weird places out there.” During his quest, Reilly wasn’t concerned with the cost. He focused on the thrill of the search and crossing off another previously unknown area. “It was like being on vacation in the city where I live,” he said. “Western Avenue goes the length of the city and you think how different the ends are. If you follow a street you’ll see it change. The building styles change and maybe the language on the signs changes. You see all these different cities within the city. It’s amazing.” — B.G.