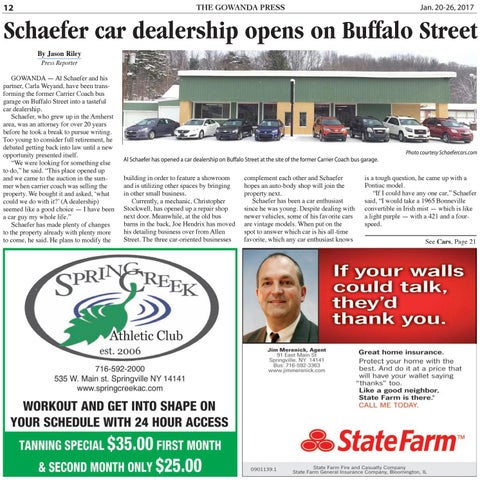 GOWANDA — Al Schaefer and his partner, Carla Weyand, have been transforming the former Carrier Coach bus garage on Buffalo Street into a tasteful car dealership. Schaefer, who grew up in the Amherst area, was an attorney for over 20 years before he took a break to pursue writing. Too young to consider full retirement, he debated getting back into law until a new opportunity presented itself. “We were looking for something else to do,” he said. “This place opened up and we came to the auction in the summer when carrier coach was selling the property. We bought it and asked, ‘what could we do with it?’ (A dealership) seemed like a good choice — I have been a car guy my whole life.” Schaefer has made plenty of changes to the property already with plenty more to come, he said. He plans to modify the

Al Schaefer has opened a car dealership on Buffalo Street at the site of the former Carrier Coach bus garage.

building in order to feature a showroom and is utilizing other spaces by bringing in other small business. Currently, a mechanic, Christopher Stockwell, has opened up a repair shop next door. Meanwhile, at the old bus barns in the back, Joe Hendrix has moved his detailing business over from Allen Street. The three car-oriented businesses

complement each other and Schaefer hopes an auto-body shop will join the property next. Schaefer has been a car enthusiast since he was young. Despite dealing with newer vehicles, some of his favorite cars are vintage models. When put on the spot to answer which car is his all-time favorite, which any car enthusiast knows

is a tough question, he came up with a Pontiac model. “If I could have any one car,” Schaefer said, “I would take a 1965 Bonneville convertible in Irish mist — which is like a light purple — with a 421 and a fourspeed. See Cars, Page 21