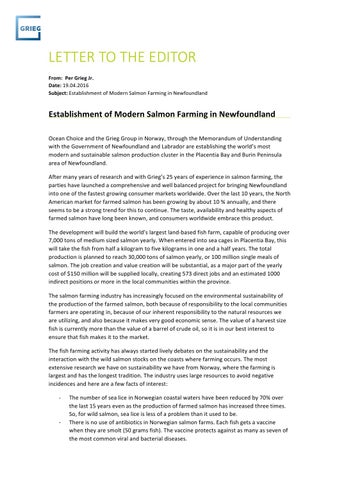 LETTER TO THE EDITOR From: Per Grieg Jr. Date: 19.04.2016 Subject: Establishment of Modern Salmon Farming in Newfoundland

Establishment of Modern Salmon Farming in Newfoundland Ocean Choice and the Grieg Group in Norway, through the Memorandum of Understanding with the Government of Newfoundland and Labrador are establishing the worldâ&#x20AC;&#x2122;s most modern and sustainable salmon production cluster in the Placentia Bay and Burin Peninsula area of Newfoundland. After many years of research and with Griegâ&#x20AC;&#x2122;s 25 years of experience in salmon farming, the parties have launched a comprehensive and well balanced project for bringing Newfoundland into one of the fastest growing consumer markets worldwide. Over the last 10 years, the North American market for farmed salmon has been growing by about 10 % annually, and there seems to be a strong trend for this to continue. The taste, availability and healthy aspects of farmed salmon have long been known, and consumers worldwide embrace this product. The development will build the worldâ&#x20AC;&#x2122;s largest land-based fish farm, capable of producing over 7,000 tons of medium sized salmon yearly. When entered into sea cages in Placentia Bay, this will take the fish from half a kilogram to five kilograms in one and a half years. The total production is planned to reach 30,000 tons of salmon yearly, or 100 million single meals of salmon. The job creation and value creation will be substantial, as a major part of the yearly cost of $150 million will be supplied locally, creating 573 direct jobs and an estimated 1000 indirect positions or more in the local communities within the province. The salmon farming industry has increasingly focused on the environmental sustainability of the production of the farmed salmon, both because of responsibility to the local communities farmers are operating in, because of our inherent responsibility to the natural resources we are utilizing, and also because it makes very good economic sense. The value of a harvest size fish is currently more than the value of a barrel of crude oil, so it is in our best interest to ensure that fish makes it to the market. The fish farming activity has always started lively debates on the sustainability and the interaction with the wild salmon stocks on the coasts where farming occurs. The most extensive research we have on sustainability we have from Norway, where the farming is largest and has the longest tradition. The industry uses large resources to avoid negative incidences and here are a few facts of interest: -

The number of sea lice in Norwegian coastal waters have been reduced by 70% over the last 15 years even as the production of farmed salmon has increased three times. So, for wild salmon, sea lice is less of a problem than it used to be. There is no use of antibiotics in Norwegian salmon farms. Each fish gets a vaccine when they are smolt (50 grams fish). The vaccine protects against as many as seven of the most common viral and bacterial diseases. Per Grieg Jr. - Establishment of Modern Salmon Farming in Newfoundland

Per Grieg Jr. - Establishment of Modern Salmon Farming in Newfoundland