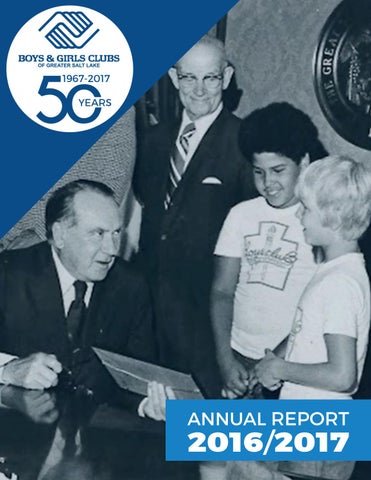 Youth of the Year

Your Donation at Work A Murray Club member does her homework during Power Hour. Your donation ensures she has school supplies and homework help, puting her on track to graduate high school with a plan for the future.

Leadership As we celebrate our 50th anniversary, weâ&#x20AC;&#x2122;d like to extend our special thanks to you for your support. With your dedicated investment, our organization has grown tremendously since opening our first two Clubs in 1967. We continue to extend our unique and innovative programs to more kids who need us, and we couldnâ&#x20AC;&#x2122;t do it without you.

Because of you, we have had a remarkable and eventful year. We are working to acquire a new location in Price, Utah, forging numerous community partnerships, and seeing more youth succeed in academics, make healthier choices, and improve their communities. Your support allows us to do more! More kids have been given a safe place to grow and learn; more teens have acquired the tools to graduate high school and make the most of what lies ahead; more passionate volunteers and staff have worked tirelessly to ensure that every young person who walks through our door is able to build a

great future. We are incredibly grateful for your generous help in achieving these outcomes.

We invite you to review some of these wonderful results, made possible by your partnership with our organization.

Your Support is Life Changing Thanks to you, Riley has a bright future. Riley was raised primarily by her grandparents after substance abuse and domestic violence affected her parents. Rylie found safety and support at her Club in Tooele, and wants to eventually return to Boys & Girls Clubs to become a mentor in the lives of the Club youth who follow her. Boys & Girls Club programs -funded by donors like you- helped Riley thrive. “One counselor, Ms. Marsha Hill, saw that as my house of cards crumbled around me there was one card that stood tall... It was me! Those words have meant the world to me.” Your support has put Riley on the path to a great future. In February Riley became Utah’s 2017 Youth of the Year. She received a scholarship, and in July, she represented Utah at Boys & Girls Clubs of America’s Pacific Region Youth of the Year competition. This January, Riley is using her Youth of the Year scholarship to attend Salt Lake Community Colege and begin working toward her dream of becoming a neurosurgeon. You made Riley’s big moment possible. Boys & Girls Clubs depend on you to provide life changing opportunities and scholarships for exceptional youth like Riley. 2

“The Club taught me that I could be an anomaly and I could play my hand differently than it had been delt to me. The counselors at Club are the Ace in my deck.” - Riley, aka “Riley Smiley” 2017 Utah State Youth of the Year

Thank You Bob, for 39 Years of Service. This year, we are both happy and saddened to see long-time Boys & Girls Club champion Bob Dunn step down as Vice President. After 39 years of service to the kids in Salt Lake County, Bob has taken his first steps towards retirement. Though he will continue to help with special projects, we will miss his constant warmth and passion in our daily routine. We would like to take the time to celebrate his legacy of good work with Club youth. Bob’s incredible record of service has been honored at local and national levels. Salt Lake County Mayor Ben McAdams officially recognized Bob’s service to the kids of Salt Lake at the County Council meeting on August 15th, 2017, and Utah Senator Gene Davis also commended his service at a special meeting of the Utah Senate held at the State Capitol building on August 23rd. Boys & Girls Clubs of America presented him with the National Service to Youth Award—the highest award given to a Boys & Girls Club professional—on August 18th of this year. In his new role, Bob will continue his work with the Executive Leadership and Board of Directors in donor and public relations to support the kids in Salt Lake, Tooele and Carbon counties. “Bob has always brought a lot of heart and passionate enthusiasm to our organization,” said LeAnn. “He values the importance of community partnerships and has worked diligently to create and sustain highly productive relationships and partnerships for the benefit of the organization and the kids we serve. He has skills and long-term relationships with other non-profits, community alliances, school districts, and city and county government agencies that are vital to helping our Clubs continue to grow and thrive. We can’t let him retire completely yet!”

“While the number of youth can be counted in the thousands, what means the most to me is the one; the one kid who walks into our Clubhouse doors and then walks out knowing that he has the power, tools and resources to change his life for the better.” - Bob Dunn

We will continue our efforts to reach even more kids in the years ahead through a combination of innovative programs, rigorous staff development, and ever-improving Club experiences. We look forward to helping youth across Salt Lake, Tooele, and Carbon Counties achieve success in the years ahead!

“The Club became a place where I was noticed. They became my family.” - Jeylani Hussein Capitol West Boys & Girls Club member

*Unaudited as of close of the fiscal year ending June 30, 2017. Audited financials will be available online at gslclubs.org.

“There is never a dull moment at the Club and it is such a fun environment! The children are simply AMAZING, they bring joy to my face every day… I wouldn’t trade this experience for the world!” -Gilfern Gonsalves, Club volunteer

Special Thank You to individuals who donated through United Way Workplace Giving Campaigns. Gifts are made July 1, 2016 through June 30, 2017. 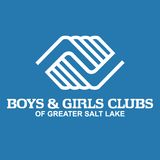