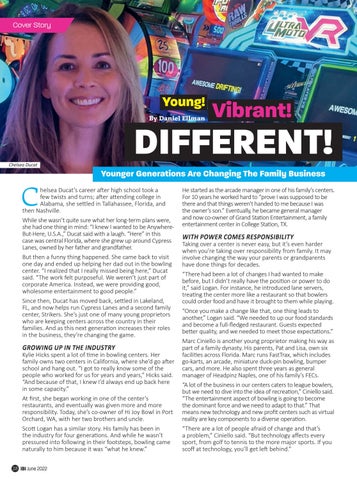 helsea Ducat’s career after high school took a few twists and turns; after attending college in Alabama, she settled in Tallahassee, Florida, and then Nashville. While she wasn’t quite sure what her long-term plans were, she had one thing in mind: “I knew I wanted to be AnywhereBut-Here, U.S.A.,” Ducat said with a laugh. “Here” in this case was central Florida, where she grew up around Cypress Lanes, owned by her father and grandfather. But then a funny thing happened. She came back to visit one day and ended up helping her dad out in the bowling center. “I realized that I really missed being here,” Ducat said. “The work felt purposeful. We weren’t just part of corporate America. Instead, we were providing good, wholesome entertainment to good people.” Since then, Ducat has moved back, settled in Lakeland, FL, and now helps run Cypress Lanes and a second family center, Strikers. She’s just one of many young proprietors who are keeping centers across the country in their families. And as this next generation increases their roles in the business, they’re changing the game.

GROWING UP IN THE INDUSTRY

Kylie Hicks spent a lot of time in bowling centers. Her family owns two centers in California, where she’d go after school and hang out. “I got to really know some of the people who worked for us for years and years,” Hicks said. “And because of that, I knew I’d always end up back here in some capacity.” At first, she began working in one of the center’s restaurants, and eventually was given more and more responsibility. Today, she’s co-owner of Hi Joy Bowl in Port Orchard, WA, with her two brothers and uncle. Scott Logan has a similar story. His family has been in the industry for four generations. And while he wasn’t pressured into following in their footsteps, bowling came naturally to him because it was “what he knew.” 28 IBI June 2022

He started as the arcade manager in one of his family’s centers. For 10 years he worked hard to “prove I was supposed to be there and that things weren’t handed to me because I was the owner’s son.” Eventually, he became general manager and now co-owner of Grand Station Entertainment, a family entertainment center in College Station, TX.

Taking over a center is never easy, but it’s even harder when you’re taking over responsibility from family. It may involve changing the way your parents or grandparents have done things for decades. “There had been a lot of changes I had wanted to make before, but I didn’t really have the position or power to do it,” said Logan. For instance, he introduced lane servers, treating the center more like a restaurant so that bowlers could order food and have it brought to them while playing. “Once you make a change like that, one thing leads to another,” Logan said. “We needed to up our food standards and become a full-fledged restaurant. Guests expected better quality, and we needed to meet those expectations.” Marc Ciniello is another young proprietor making his way as part of a family dynasty. His parents, Pat and Lisa, own six facilities across Florida. Marc runs FastTrax, which includes go-karts, an arcade, miniature duck-pin bowling, bumper cars, and more. He also spent three years as general manager of Headpinz Naples, one of his family’s FECs. “A lot of the business in our centers caters to league bowlers, but we need to dive into the idea of recreation,” Ciniello said. “The entertainment aspect of bowling is going to become the dominant force and we need to adapt to that.” That means new technology and new profit centers such as virtual reality are key components to a diverse operation. “There are a lot of people afraid of change and that’s a problem,” Ciniello said. “But technology affects every sport, from golf to tennis to the more major sports. If you scoff at technology, you’ll get left behind.” 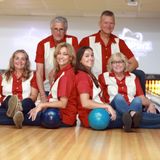