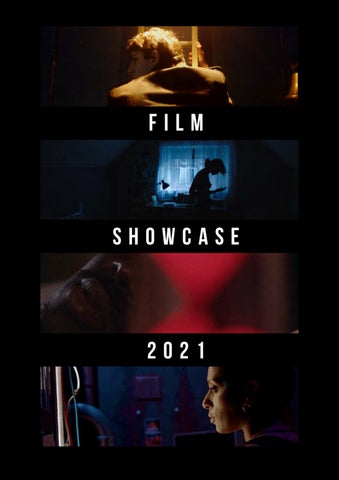 The story follows Ellery, a naïve and desperate boy competing in a poetry competition. Insecure; obsessed with the image of becoming a writer, he confides in his favourite English teacher, Mrs. Beckett, who gave up writing herself many years ago. With an unfinished poem which must be submitted by the end of the day, he pleads for her feedback, to which she refuses as she is moderating the competition.

RONEL The film follows the brutal murder of a woman in South Africa. Her sister Ronel battles with her own anger and pain through grief and depression to try and reach a point of forgiveness. DIR: DAVID CLODE

Irere advocates for sustainable change in the UK fashion industry and consumer habits through evoking the audience to explore the journey their clothing has been on. Through stop-motion and macro cinematography, viewers are shown the layers of the industry, from its historic origins to its present day state.

JUNIPER Lutz goes inside the manhole and enters a subconscious world of memories inside a cruise ship, where he encounters two characters who represent qualities of Heidi- someone he used to know- seen through his perspective: Pearl and Al. That leads him deeper to confront one of his memories – a memory of Heidi.

After recently winning the lottery, Daniel finds himself trapped in a self-inflicted purgatory and torn between two possibilities: accept the money or break free from the expectations of society.

After a tense car journey results in the breakdown of her relationship, Ashley accidentally crashes the car – killing her girlfriend. She panics and flees the scene, leaving her girlfriend behind. Confronted with her overwhelming guilt, she confesses what she’s done to her police officer father, plunging him into an impossible choice between his morals and his love for his daughter.

Set in the 90s, Jacob, the owner of a failing cassette shop in London takes it upon himself to construct a landing platform on the roof of his shop, so that his alien love interest Astra, whom he communicates with through a boombox, can come down and rescue him.

Baile In rural 1950s Ireland, Emer’s only daughter is rushed away to hospital after being badly beaten by her teacher. In defiance of her husband, she marches down to the headmaster’s office. Faced with systemic abuse, Emer decides to take matters into her own hands. DIR: KIERAN WALL

STARGAZER STARGAZER follows an estranged, disconnected family on a journey through DIR: ARVIND JAY the stars as they come together after a recent loss.. Michael D. Douglas

During the Caribbean funerary tradition- Nine Night, Solomon a young man haunted by the memory of his father is forced to connect with his estranged half-brother. Take a look at this year's final graduation films, from the class of 2021. BA (Hons) Film Production

Take a look at this year's final graduation films, from the class of 2021. BA (Hons) Film Production