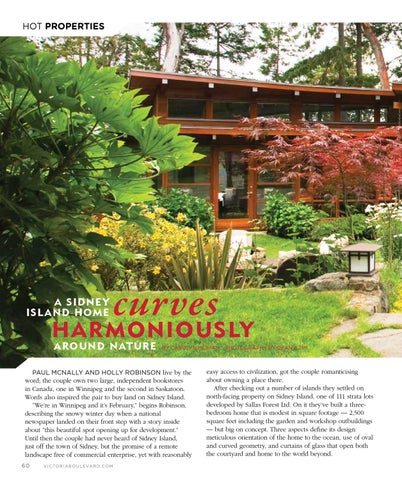 a Sidne y Isl and home

Paul McNally and Holly Robinson live by the word; the couple own two large, independent bookstores in Canada, one in Winnipeg and the second in Saskatoon. Words also inspired the pair to buy land on Sidney Island. “We’re in Winnipeg and it’s February,” begins Robinson, describing the snowy winter day when a national newspaper landed on their front step with a story inside about “this beautiful spot opening up for development.” Until then the couple had never heard of Sidney Island, just off the town of Sidney, but the promise of a remote landscape free of commercial enterprise, yet with reasonably 60

easy access to civilization, got the couple romanticising about owning a place there. After checking out a number of islands they settled on north-facing property on Sidney Island, one of 111 strata lots developed by Sallas Forest Ltd. On it they’ve built a threebedroom home that is modest in square footage — 2,500 square feet including the garden and workshop outbuildings — but big on concept. Three aspects define its design: meticulous orientation of the home to the ocean, use of oval and curved geometry, and curtains of glass that open both the courtyard and home to the world beyond.