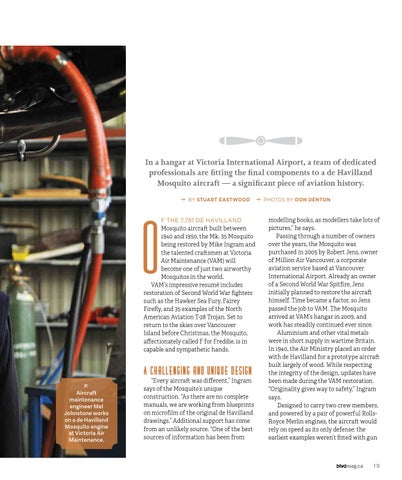 In a hangar at Victoria International Airport, a team of dedicated professionals are fitting the final components to a de Havilland Mosquito aircraft — a significant piece of aviation history.  by STUART EASTWOOD

f the 7,781 de Havilland Mosquito aircraft built between 1940 and 1950, the Mk. 35 Mosquito being restored by Mike Ingram and the talented craftsmen at Victoria Air Maintenance (VAM) will become one of just two airworthy Mosquitos in the world. VAM’s impressive resumé includes restoration of Second World War fighters such as the Hawker Sea Fury, Fairey Firefly, and 35 examples of the North American Aviation T-28 Trojan. Set to return to the skies over Vancouver Island before Christmas, the Mosquito, affectionately called F for Freddie, is in capable and sympathetic hands.

“Every aircraft was different,” Ingram says of the Mosquito’s unique construction. “As there are no complete manuals, we are working from blueprints on microfilm of the original de Havilland drawings.” Additional support has come from an unlikely source. “One of the best sources of information has been from

modelling books, as modellers take lots of pictures,” he says. Passing through a number of owners over the years, the Mosquito was purchased in 2005 by Robert Jens, owner of Million Air Vancouver, a corporate aviation service based at Vancouver International Airport. Already an owner of a Second World War Spitfire, Jens initially planned to restore the aircraft himself. Time became a factor, so Jens passed the job to VAM. The Mosquito arrived at VAM’s hangar in 2009, and work has steadily continued ever since. Aluminium and other vital metals were in short supply in wartime Britain. In 1940, the Air Ministry placed an order with de Havilland for a prototype aircraft built largely of wood. While respecting the integrity of the design, updates have been made during the VAM restoration. “Originality gives way to safety,” Ingram says. Designed to carry two crew members, and powered by a pair of powerful RollsRoyce Merlin engines, the aircraft would rely on speed as its only defense: the earliest examples weren’t fitted with gun