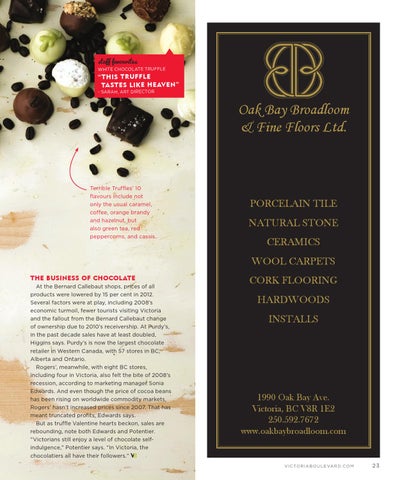 Terrible Truffles’ 10 flavours include not only the usual caramel, coffee, orange brandy and hazelnut, but also green tea, red peppercorns, and cassis.

THE BUSINESS OF CHOCOLATE At the Bernard Callebaut shops, prices of all products were lowered by 15 per cent in 2012. Several factors were at play, including 2008’s economic turmoil, fewer tourists visiting Victoria and the fallout from the Bernard Callebaut change of ownership due to 2010’s receivership. At Purdy’s, in the past decade sales have at least doubled, Higgins says. Purdy’s is now the largest chocolate retailer in Western Canada, with 57 stores in BC, Alberta and Ontario. Rogers’, meanwhile, with eight BC stores, including four in Victoria, also felt the bite of 2008’s recession, according to marketing manager Sonia Edwards. And even though the price of cocoa beans has been rising on worldwide commodity markets, Rogers’ hasn’t increased prices since 2007. That has meant truncated profits, Edwards says. But as truffle Valentine hearts beckon, sales are rebounding, note both Edwards and Potentier. “Victorians still enjoy a level of chocolate selfindulgence,” Potentier says. “In Victoria, the chocolatiers all have their followers.” VB