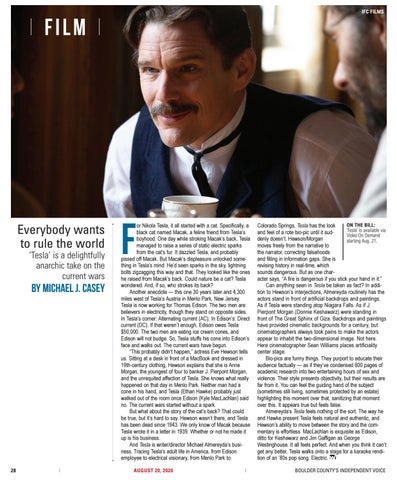 Everybody wants to rule the world

‘Tesla’ is a delightfully anarchic take on the current wars

or Nikola Tesla, it all started with a cat. Specifically, a black cat named Macak, a feline friend from Tesla’s boyhood. One day while stroking Macak’s back, Tesla managed to raise a series of static electric sparks from the cat’s fur. It dazzled Tesla, and probably pissed off Macak. But Macak’s displeasure unlocked something in Tesla’s mind: He’d seen sparks in the sky, lightning bolts zigzagging this way and that. They looked like the ones he raised from Macak’s back. Could nature be a cat? Tesla wondered. And, if so, who strokes its back? Another anecdote — this one 30 years later and 4,300 miles west of Tesla’s Austria in Menlo Park, New Jersey. Tesla is now working for Thomas Edison. The two men are believers in electricity, though they stand on opposite sides. In Tesla’s corner: Alternating current (AC). In Edison’s: Direct current (DC). If that weren’t enough, Edison owes Tesla $50,000. The two men are eating ice cream cones, and Edison will not budge. So, Tesla stuffs his cone into Edison’s face and walks out. The current wars have begun. “This probably didn’t happen,” actress Eve Hewson tells us. Sitting at a desk in front of a MacBook and dressed in 19th-century clothing, Hewson explains that she is Anne Morgan, the youngest of four to banker J. Pierpont Morgan, and the unrequited affection of Tesla. She knows what really happened on that day in Menlo Park. Neither man had a cone in his hand, and Tesla (Ethan Hawke) probably just walked out of the room once Edison (Kyle MacLachlan) said no. The current wars started without a spark. But what about the story of the cat’s back? That could be true, but it’s hard to say. Hewson wasn’t there, and Tesla has been dead since 1943. We only know of Macak because Tesla wrote it in a letter in 1939. Whether or not he made it up is his business. And Tesla is writer/director Michael Almereyda’s business. Tracing Tesla’s adult life in America, from Edison employee to electrical visionary, from Menlo Park to AUGUST 20, 2020

ON THE BILL: Colorado Springs, Tesla has the look ‘Tesla’ is available via and feel of a rote bio-pic until it sudVideo On Demand denly doesn’t. Hewson/Morgan starting Aug. 21. moves freely from the narrative to the narrator, correcting falsehoods and filling in information gaps. She is revising history in real-time, which sounds dangerous. But as one character says, “A fire is dangerous if you stick your hand in it.” Can anything seen in Tesla be taken as fact? In addition to Hewson’s interjections, Almereyda routinely has the actors stand in front of artificial backdrops and paintings. As if Tesla were standing atop Niagara Falls. As if J. Pierpont Morgan (Donnie Keshawarz) were standing in front of The Great Sphinx of Giza. Backdrops and paintings have provided cinematic backgrounds for a century, but cinematographers always took pains to make the actors appear to inhabit the two-dimensional image. Not here. Here cinematographer Sean Williams places artificiality center stage. Bio-pics are funny things. They purport to educate their audience factually — as if they’ve condensed 600 pages of academic research into two entertaining hours of sex and violence. Their style presents objectivity, but their results are far from it. You can feel the guiding hand of the subject (sometimes still living, sometimes protected by an estate) highlighting this moment over that, sanitizing that moment over this. It appears true but feels false. Almereyda’s Tesla feels nothing of the sort. The way he and Hawke present Tesla feels natural and authentic, and Hewson’s ability to move between the story and the commentary is effortless. MacLachlan is exquisite as Edison, ditto for Keshawarz and Jim Gaffigan as George Westinghouse. It all feels perfect. And when you think it can’t get any better, Tesla walks onto a stage for a karaoke rendition of an ’80s pop song. Electric. BOULDER COUNTY’S INDEPENDENT VOICE