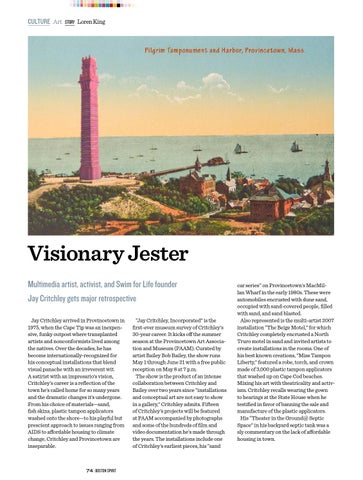 Visionary Jester Multimedia artist, activist, and Swim for Life founder Jay Critchley gets major retrospective Jay Critchley arrived in Provincetown in 1975, when the Cape Tip was an inexpensive, funky outpost where transplanted artists and nonconformists lived among the natives. Over the decades, he has become internationally-recognized for his conceptual installations that blend visual panache with an irreverent wit. A satirist with an impresario’s vision, Critchley’s career is a reflection of the town he’s called home for so many years and the dramatic changes it’s undergone. From his choice of materials—sand, fish skins, plastic tampon applicators washed onto the shore—to his playful but prescient approach to issues ranging from AIDS to affordable housing to climate change, Critchley and Provincetown are inseparable.

“Jay Critchley, Incorporated” is the first-ever museum survey of Critchley’s 30-year career. It kicks off the summer season at the Provincetown Art Association and Museum (PAAM). Curated by artist Bailey Bob Bailey, the show runs May 1 through June 21 with a free public reception on May 8 at 7 p.m. The show is the product of an intense collaboration between Critchley and Bailey over two years since “installations and conceptual art are not easy to show in a gallery,” Critchley admits. Fifteen of Critchley’s projects will be featured at PAAM accompanied by photographs and some of the hundreds of film and video documentation he’s made through the years. The installations include one of Critchley’s earliest pieces, his “sand

car series” on Provincetown’s MacMillan Wharf in the early 1980s. These were automobiles encrusted with dune sand, occupied with sand-covered people, filled with sand, and sand blasted. Also represented is the multi-artist 2007 installation “The Beige Motel,” for which Critchley completely encrusted a North Truro motel in sand and invited artists to create installations in the rooms. One of his best known creations, “Miss Tampon Liberty,” featured a robe, torch, and crown made of 3,000 plastic tampon applicators that washed up on Cape Cod beaches. Mixing his art with theatricality and activism. Critchley recalls wearing the gown to hearings at the State House when he testified in favor of banning the sale and manufacture of the plastic applicators. His “Theater in the Ground@ Septic Space” in his backyard septic tank was a sly commentary on the lack of affordable housing in town.