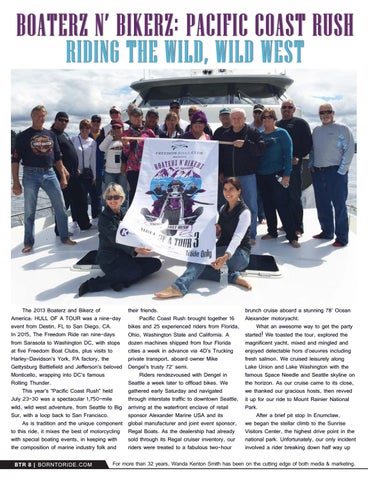 The 2013 Boaterz and Bikerz of America: HULL OF A TOUR was a nine-day event from Destin, FL to San Diego, CA. In 2015, The Freedom Ride ran nine-days from Sarasota to Washington DC, with stops at five Freedom Boat Clubs, plus visits to Harley-Davidson’s York, PA factory, the Gettysburg Battlefield and Jefferson’s beloved Monticello, wrapping into DC’s famous Rolling Thunder. This year’s “Pacific Coast Rush” held July 23-30 was a spectacular 1,750-mile wild, wild west adventure, from Seattle to Big Sur, with a loop back to San Francisco. As is tradition and the unique component to this ride, it mixes the best of motorcycling with special boating events, in keeping with the composition of marine industry folk and BTR 8 | BORNTORIDE.COM

their friends. Pacific Coast Rush brought together 16 bikes and 25 experienced riders from Florida, Ohio, Washington State and California. A dozen machines shipped from four Florida cities a week in advance via 4D’s Trucking private transport, aboard owner Mike Dengel’s trusty 72’ semi. Riders rendezvoused with Dengel in Seattle a week later to offload bikes. We gathered early Saturday and navigated through interstate traffic to downtown Seattle, arriving at the waterfront enclave of retail sponsor Alexander Marine USA and its global manufacturer and joint event sponsor, Regal Boats. As the dealership had already sold through its Regal cruiser inventory, our riders were treated to a fabulous two-hour

brunch cruise aboard a stunning 78’ Ocean Alexander motoryacht. What an awesome way to get the party started! We toasted the tour, explored the magnificent yacht, mixed and mingled and enjoyed delectable hors d’oeuvres including fresh salmon. We cruised leisurely along Lake Union and Lake Washington with the famous Space Needle and Seattle skyline on the horizon. As our cruise came to its close, we thanked our gracious hosts, then revved it up for our ride to Mount Rainier National Park. After a brief pit stop In Enumclaw, we began the stellar climb to the Sunrise Visitors Center, the highest drive point in the national park. Unfortunately, our only incident involved a rider breaking down half way up

For more than 32 years, Wanda Kenton Smith has been on the cutting edge of both media & marketing. 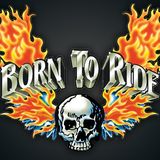