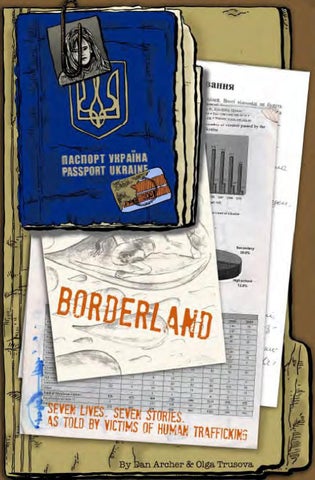 lera's story In Leraâ&#x20AC;&#x2122;s Story, we wanted to provide a personal account of how victims deal with their experiences, and chronicle the path that leads to their exploitation. "Lera" is a real person who came to the rehabilitation center after being trafficked from Ukraine to Russia for illegal work. Her story leading up to that moment is as equally important for understanding how she ended up in such a situation. She is part Roma living in Ukraine. Romani people5 are an ethnic group with origins in South Asia or Eastern Europe who are widely dispersed with their largest concentrated populations in Europe, especially Central and Eastern Europe, with more recent diaspora populations in the Americas and, to a lesser extent, in North Africa and the Middle East.

The first category of patients at the IOM center consists mainly of women 13-19 years old (close to 8% being under-aged). Fake job ads, dishonest boyfriends, cruel parents, even neighbors, friends, acquaintances - these are some of the ways we have heard for girls to be betrayed and sold into slavery. Some are forced into borrowing money to cover the cost of their paperwork and tickets, others are sold to bosses and told to work off the investment they represent - in both cases, victims find themselves immediately landed with crippling debts. The second category of patients at the rehabilitation center consists of older men and women of varying ages who were trafficked for labor exploitation. In general, the tendency is to traffic people ages 18-30 to Western Europe for sexual exploitation, and to send those aged 35-55 to Russia for labor.6

The rehabilitation center, where Lera stayed, is run by the IOM in Kyiv, the capital of Ukraine, and on average treats close to 1,400 victims of sexual and/or labor exploitation annually.

The rehabilitation center offers a variety of services including medical and psychological care and runs a wonderful art therapy program. The illustrations on this page are some of the artwork samples produced by former victims of human trafficking at the center.

5 For more on Roma Culture, Laws and Traditions, visit the European Roma Rights Center: <http://www.errc.org/en-research-and-advocacy-roma-details.php?article_id=2284> 6 From our interview with the chief psychologist at the IOM's rehabilitation center, Kyiv, Ukraine in Nov 2009

chipped away As awareness of human trafficking grows in the media and beyond, traffickers have learned to take more precautions to keep their operations hidden from the law. Trafficking of men, children, and elderly as well as repeat trafficking are on the rise, as is the amount of labor traffic and internal migration. For instance, Russia holds the 1st place as the destination country for illegal work in the post-Soviet region. Other destination countries include Turkey, Poland, Czech Republic, Cyprus, Germany, Italy.7 Workers lured by the promise of work in Russia are distributed to small towns for harvesting, construction or manufacturing jobs but are forced to live in guarded facilities or sometimes even in mud huts. Passports and mobile phones are demanded or violently removed. Payment is always "on completion" and based on oral agreement only. After their work is complete, workers may be released with a token payment of

anything from $2 to $20, so that they cannot claim to the police that they were not paid - even if their work period lasted months or even years. As a result, counter-trafficking NGOs have to shift their focus from identifying the lack of pay or evidence of violent acts as the legal basis for prosecution to identifying violations of freedoms of movement and choice. For example, in a recent legal case, a group of over 500 Ukrainians was trafficked to Russia for potato farming. They were not paid. Chipped Away is based on 3 of the victims' testimonies. The story ended with the boss leaving the door to the barracks unlocked, giving the workers the opportunity to escape without any pay or means of returning home. With no contract or legal papers to back their stories up, workers have no choice but to take their freedom over the possibility of monetary compensation.

star of the orient According to our findings, sex trafficking has not only increased, but also has become more overt. Traffickers are looking for maximization of legality in their activities. Victims do not fit a particular profile and it's hard to segregate them into just one or two categories. Under certain circumstances, it can happen to anyone. What matters is prevention: how people prepare and respond to the situation they might find themselves in. Human trafficking is not what it used to be. In the past, a typical situation would happen as follows: a girl or a woman would agree to work abroad as a waitress, a dancer, or an au pair. Once she got to her destination, she might be raped and beaten, her passport taken away, and find herself forced to work in a brothel, paralysed by fear. Pimps would 14

make girls remain abroad illegally, even after their visas expire. Often, girls couldn't handle more than one year in a brothel and would run away. If she was lucky, she would be picked up by the police, who would then raid the brothel and free the remaining girls. The situation now involves new means of exerting pressure on victims: starvation, freezing, or no access to water (all of which leave no visible marks, making prosecution difficult) as means to force a girl to work as a prostitute in a private apartment or to be driven around to private homes. Girls are made to stay for the legal duration of their visa (typically 6 months or less) and pimps get them a cheap ticket home or provide them with a small amount of money (as little as $50 sometimes), so that they can't claim they weren't paid.14

From our interview with the chief psychologist at the IOM's rehabilitation center, Kyiv, Ukraine in Nov 2009

About the Authors Olga Trusova is an educator, originally from Ukraine, now based in California. She was a 2009 Fulbright Fellow from Stanford University and spent a year conducting research and interviews for this book. You can now find her in San Francisco tinkering with design, technology, and new media.

Dan Archer is a comics journalist from the UK now based in California. He is a 2010 John S. Knight Journalism Fellow at Stanford and the creator of www.archcomix.com. His work has appeared in the Guardian UK, Huffington Post, Alternet.org and Religion Dispatches. 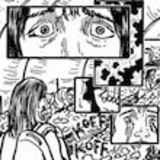 Borderland comic tells seven stories about human trafficking based on real testimonies from survivors. From a pastry maker in Warsaw to a wa...

Borderland comic tells seven stories about human trafficking based on real testimonies from survivors. From a pastry maker in Warsaw to a wa...