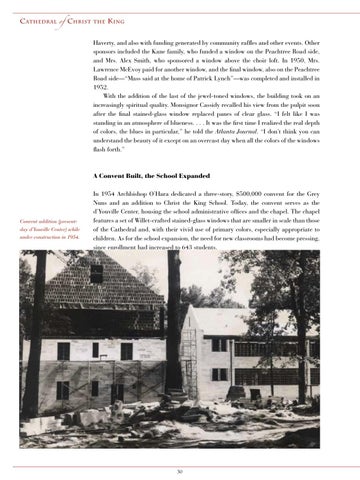 Haverty, and also with funding generated by community raffles and other events. Other sponsors included the Kane family, who funded a window on the Peachtree Road side, and Mrs. Alex Smith, who sponsored a window above the choir loft. In 1950, Mrs. Lawrence McEvoy paid for another window, and the final window, also on the Peachtree Road side—“Mass said at the home of Patrick Lynch”—was completed and installed in 1952. With the addition of the last of the jewel-toned windows, the building took on an increasingly spiritual quality. Monsignor Cassidy recalled his view from the pulpit soon after the final stained-glass window replaced panes of clear glass. “I felt like I was standing in an atmosphere of blueness. . . . It was the first time I realized the real depth of colors, the blues in particular,” he told the Atlanta Journal. “I don’t think you can understand the beauty of it except on an overcast day when all the colors of the windows flash forth.”

A Convent Built, the School Expanded

Convent addition (presentday d’Youville Center) while under construction in 1954.

In 1954 Archbishop O’Hara dedicated a three-story, $500,000 convent for the Grey Nuns and an addition to Christ the King School. Today, the convent serves as the d’Youville Center, housing the school administrative offices and the chapel. The chapel features a set of Willet-crafted stained-glass windows that are smaller in scale than those of the Cathedral and, with their vivid use of primary colors, especially appropriate to children. As for the school expansion, the need for new classrooms had become pressing, since enrollment had increased to 643 students. Cathedral of Christ the King: The History 1937– 2012 describes the growth of a closely knit society of Atlanta Catholics evolving into a div...

Cathedral of Christ the King: The History 1937– 2012 describes the growth of a closely knit society of Atlanta Catholics evolving into a div...