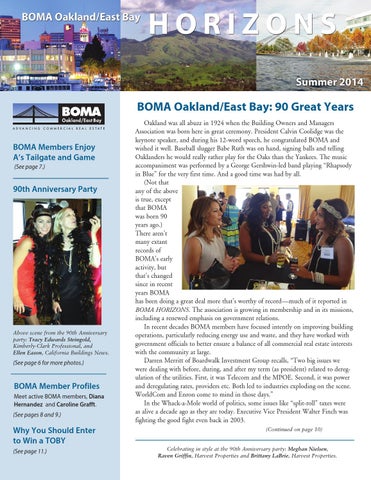 Oakland was all abuzz in 1924 when the Building Owners and Managers Association was born here in great ceremony. President Calvin Coolidge was the keynote speaker, and during his 12-word speech, he congratulated BOMA and wished it well. Baseball slugger Babe Ruth was on hand, signing balls and telling Oaklanders he would really rather play for the Oaks than the Yankees. The music accompaniment was performed by a George Gershwin-led band playing “Rhapsody in Blue” for the very first time. And a good time was had by all. (Not that any of the above is true, except that BOMA was born 90 years ago.) There aren’t many extant records of BOMA’s early activity, but that’s changed since in recent years BOMA has been doing a great deal more that’s worthy of record—much of it reported in BOMA HORIZONS. The association is growing in membership and in its missions, including a renewed emphasis on government relations. In recent decades BOMA members have focused intently on improving building operations, particularly reducing energy use and waste, and they have worked with government officials to better ensure a balance of all commercial real estate interests with the community at large. Darren Merritt of Boardwalk Investment Group recalls, “Two big issues we were dealing with before, during, and after my term (as president) related to deregulation of the utilities. First, it was Telecom and the MPOE. Second, it was power and deregulating rates, providers etc. Both led to industries exploding on the scene. WorldCom and Enron come to mind in those days.” In the Whack-a-Mole world of politics, some issues like “split-roll” taxes were as alive a decade ago as they are today. Executive Vice President Walter Finch was fighting the good fight even back in 2003. (Continued on page 10) Celebrating in style at the 90th Anniversary party: Meghan Nielsen, Raven Griffin, Harvest Properties and Brittany LaBrie, Harvest Properties.