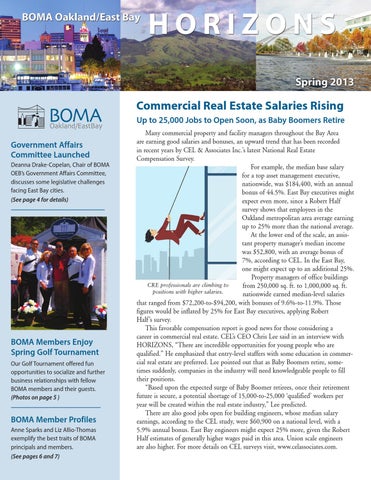 Many commercial property and facility managers throughout the Bay Area are earning good salaries and bonuses, an upward trend that has been recorded in recent years by CEL & Associates Inc.’s latest National Real Estate Compensation Survey. For example, the median base salary for a top asset management executive, nationwide, was $184,400, with an annual bonus of 44.5%. East Bay executives might expect even more, since a Robert Half survey shows that employees in the Oakland metropolitan area average earning up to 25% more than the national average. At the lower end of the scale, an assistant property manager’s median income was $52,800, with an average bonus of 7%, according to CEL. In the East Bay, one might expect up to an additional 25%. Property managers of office buildings CRE professionals are climbing to from 250,000 sq. ft. to 1,000,000 sq. ft. positions with higher salaries. nationwide earned median-level salaries that ranged from $72,200-to-$94,200, with bonuses of 9.6%-to-11.9%. Those figures would be inflated by 25% for East Bay executives, applying Robert Half ’s survey. This favorable compensation report is good news for those considering a career in commercial real estate. CEL’s CEO Chris Lee said in an interview with HORIZONS, “There are incredible opportunities for young people who are qualified.” He emphasized that entry-level staffers with some education in commercial real estate are preferred. Lee pointed out that as Baby Boomers retire, sometimes suddenly, companies in the industry will need knowledgeable people to fill their positions. “Based upon the expected surge of Baby Boomer retirees, once their retirement future is secure, a potential shortage of 15,000-to-25,000 ‘qualified’ workers per year will be created within the real estate industry,” Lee predicted. There are also good jobs open for building engineers, whose median salary earnings, according to the CEL study, were $60,900 on a national level, with a 5.9% annual bonus. East Bay engineers might expect 25% more, given the Robert Half estimates of generally higher wages paid in this area. Union scale engineers are also higher. For more details on CEL surveys visit, www.celassociates.com. News for members and friends of BOMA Oakland/East Bay

News for members and friends of BOMA Oakland/East Bay