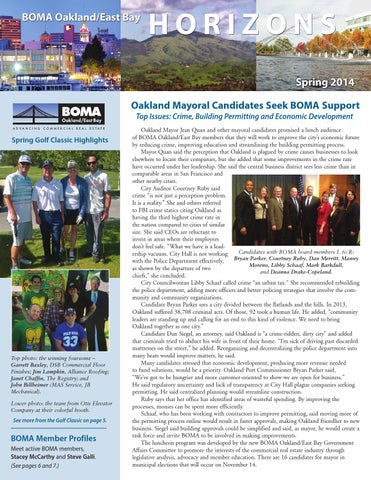 Oakland Mayor Jean Quan and other mayoral candidates promised a lunch audience of BOMA Oakland/East Bay members that they will work to improve the city’s economic future by reducing crime, improving education and streamlining the building permitting process. Mayor Quan said the perception that Oakland is plagued by crime causes businesses to look elsewhere to locate their companies, but she added that some improvements in the crime rate have occurred under her leadership. She said the central business district sees less crime than in comparable areas in San Francisco and other nearby cities. City Auditor Courtney Ruby said crime “is not just a perception problem. It is a reality.” She and others referred to FBI crime statics citing Oakland as having the third highest crime rate in the nation compared to cities of similar size. She said CEOs are reluctant to invest in areas where their employees don’t feel safe. “What we have is a leadCandidates with BOMA board members L to R: ership vacuum. City Hall is not working Bryan Parker, Courtney Ruby, Dan Merritt, Manny with the Police Department effectively, Moreno, Libby Schaaf, Mark Barkdull, as shown by the departure of two and Deanna Drake-Copeland. chiefs,” she concluded. City Councilwoman Libby Schaaf called crime “an urban tax.” She recommended rebuilding the police department, adding more officers and better policing strategies that involve the community and community organizations. Candidate Bryan Parker sees a city divided between the flatlands and the hills. In 2013, Oakland suffered 38,708 criminal acts. Of those, 92 took a human life. He added, “community leaders are standing up and calling for an end to this kind of violence. We need to bring Oakland together as one city.” Candidate Dan Siegel, an attorney, said Oakland is “a crime-ridden, dirty city” and added that criminals tried to abduct his wife in front of their home. “I’m sick of driving past discarded mattresses on the street,” he added. Reorganizing and decentralizing the police department into many beats would improve matters, he said. Many candidates stressed that economic development, producing more revenue needed to fund solutions, would be a priority. Oakland Port Commissioner Bryan Parker said, “We’ve got to be hungrier and more customer-oriented to show we are open for business.” He said regulatory uncertainty and lack of transparency at City Hall plague companies seeking permitting. He said centralized planning would streamline construction. Ruby says that her office has identified areas of wasteful spending. By improving the processes, monies can be spent more efficiently. Schaaf, who has been working with contractors to improve permitting, said moving more of the permitting process online would result in faster approvals, making Oakland friendlier to new business. Siegel said building approvals could be simplified and said, as mayor, he would create a task force and invite BOMA to be involved in making improvements. The luncheon program was developed by the new BOMA Oakland/East Bay Government Affairs Committee to promote the interests of the commercial real estate industry through legislative analysis, advocacy and member education. There are 16 candidates for mayor in municipal elections that will occur on November 14. News from the Building Owners and Managers Association Oakland/East Bay.

News from the Building Owners and Managers Association Oakland/East Bay.