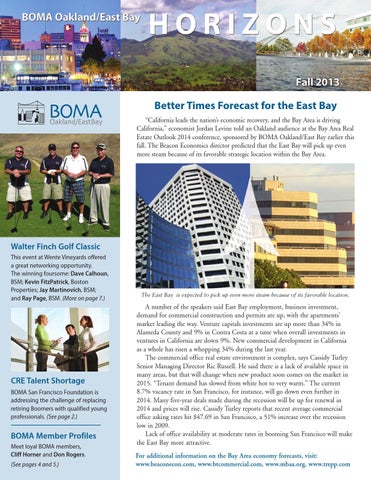 Better Times Forecast for the East Bay “California leads the nation’s economic recovery, and the Bay Area is driving California,” economist Jordan Levine told an Oakland audience at the Bay Area Real Estate Outlook 2014 conference, sponsored by BOMA Oakland/East Bay earlier this fall. The Beacon Economics director predicted that the East Bay will pick up even more steam because of its favorable strategic location within the Bay Area.

The East Bay is expected to pick up even more steam because of its favorable location.

A number of the speakers said East Bay employment, business investment, demand for commercial construction and permits are up, with the apartments’ market leading the way. Venture capitals investments are up more than 34% in Alameda County and 9% in Contra Costa at a time when overall investments in ventures in California are down 9%. New commercial development in California as a whole has risen a whopping 34% during the last year. The commercial office real estate environment is complex, says Cassidy Turley Senior Managing Director Ric Russell. He said there is a lack of available space in many areas, but that will change when new product soon comes on the market in 2015. “Tenant demand has slowed from white hot to very warm.” The current 8.7% vacancy rate in San Francisco, for instance, will go down even further in 2014. Many five-year deals made during the recession will be up for renewal in 2014 and prices will rise. Cassidy Turley reports that recent average commercial office asking rates hit $47.69 in San Francisco, a 51% increase over the recession low in 2009. Lack of office availability at moderate rates in booming San Francisco will make the East Bay more attractive. For additional information on the Bay Area economy forecasts, visit: www.beaconecon.com, www.btcommercial.com, www.mbaa.org, www.trepp.com