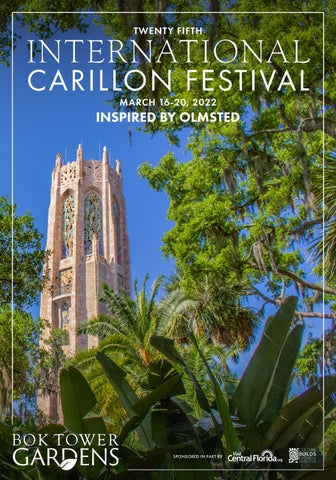 SPONSORED IN PART BY

WHAT IS A CARILLON? A carillon is a musical instrument consisting of at least 23 cast bronze bells that are precisely tuned and arranged in chromatic progression so that music in any key can be played. Unlike other types of bells, carillon bells are fixed in a frame—the bells do not move. Instead, the clappers inside strike the bells to produce a considerable range of sounds up to five or six octaves. Because of its weight and size, the carillon is the largest instrument in the world. A carillon is played from a keyboard on which the keys are depressed by the player’s closed hands and feet. The keys are connected to the clappers by vertical and horizontal wires.

ABOUT OUR CARILLON The carillon at Bok Tower Gardens has 60 bells ranging in weight from 16 pounds to nearly 12 tons. The instrument was designed and built in 1928 by John Taylor Bellfoundry, Ltd. of Loughborough, England which still makes bells today. There are four carillons in Florida, approximately 200 in North America and 600 throughout the world.

Thank you for joining us in celebrating one of the world’s greatest carillons, Bok Tower Gardens’ Singing Tower. With performances by world-renowned carillonneurs, enjoy a renaissance of this unique musical instrument through debut performances of new compositions and music performed throughout the 500-year history of the carillon.

HOW IS CARILLON MUSIC WRIT TEN AND PLAYED? Although carillon music looks like piano music, the treble clef is usually played by the hands and the bass clef by the feet. The carillon’s action is mechanical, which allows the performer to control the dynamics (loud and soft) by the force of the strike. There is no mechanism to dampen the sound after a bell is struck. Because carillon bells are rich in overtones, the consonant and dissonant combinations are sometimes reversed in carillon music to account for the presence of a minor-third overtone in each bell.

HOW ARE THE BELLS TUNED? Carillon bells are tuned just after they are cast and before they are installed. A bell is placed on a lathe and metal is carefully removed from the various heights of the inside wall of the bell. Bells only have to be re-tuned approximately once every 300 years.

INSPIRED BY OLMSTED 2022 WINNER Belgian-American composer and carillonneur Geert D’hollander was named Bok Tower Gardens’ fourth full-time carillonneur in October 2012. He has studied, performed, taught, arranged and composed carillon music for more than 35 years. He has held permanent and guest teaching positions of carillon performance and composition at the Royal Carillon School in Mechelen, Belgium, the Dutch Carillon School in Amersfoort and at the University College Roosevelt in Middelburg, both in The Netherlands. From 19971999, Geert was the Carillonneur and Professor of Carillon at the University of California at Berkeley, succeeding Ronald Barnes.

American landscape design. His son, Frederick Law Olmsted Jr. designed Bok Tower Gardens and many of our nation&#39;s finest public spaces. As part of this nationwide celebration, the National Association for Olmsted Parks and Olmsted 200 sponsored an international carillon composition competition in 2021, entitled Inspired by Olmsted. An expert jury, chaired by Washington National Cathedral Carillonneur, Edward Nassor, selected five compositions, and D&#39;hollander was awarded first place for his original composition. His winning composition Four Miniatures: Spring Flowers at the U.S. Capitol Grounds, The Reflection Pond at Bok Tower, A Court Dance at the Biltmore Gardens, and Central Park in the Fall will be shared with carillonneurs around the globe. PHOTO CREDIT: MIKE POTTHAST

Bok Tower Gardens participated with gardens across the nation to commemorate the 200th birthday of Frederick Law Olmsted Sr., father of

CARILLONNEURS Besides being the Professor of Carillon at the Music Conservatory of Douai, Colletti also the teacher of harmony, counterpoint and orchestration at the conservatory of Valenciennes. As the Director of the Carillon Festival in Douai, he organizes special concerts with the carillon and other instruments every summer. In addition to playing recitals in his native France, he has performed in Belgium, Germany, Spain, The Netherlands, Denmark, Norway, Portugal, England, Ireland, Switzerland, Canada and the USA.

STEFANO COLLETTI FRANCE Stefano Colletti has studied piano, music theory, harmony, orchestration and chamber music at the Music Conservatories of Lille and Douai and graduated from the French Carillon School as “maître carillonneur” in 1994. In 1998 he was admitted to the “Conservatoire National Supérieur de Musique de PARIS” where he obtained his “Diplôme supérieur d’écriture musicale mention très bien”. The same year, he was appointed as the city carillonneur of Douai, the 35th carillonneur since their first instrument was installed in 1391!

Colletti composed several pieces for the carillon. One of the compositions, “Sonatine”, was first performed at the 2001 Bok Tower Carillon Festival. His last work, “Invicta” (2019), was written for bells and brass and served as the required piece at the “International Queen Fabiola Carillon Competition” in Mechelen (Belgium). Stefano will be our Composer in Residency and our Blanchard Carillon Fellow from February until the end of April 2022.

CARILLONNEURS served as Chair of the Nomination Committee for several years, was on the Board from 1996-99 and was reelected for the 2017-2020 term. She is also an instructor at the North American Carillon School.

CAROL JICKLING LENS USA Carol Jickling Lens began her carillon studies in eighth grade with Beverly Buchanan at Christ Church in Cranbrook, Bloomfield Hills, Michigan. She continued with the carillon at the University of Michigan, with R. Hudson Ladd. In the middle of college came the excitement of going to The Netherlands Carillon School in Amersfoort, The Netherlands, studying with Leen ‘t Hart, where she earned both the Practical and End Diplomas.

Lens has played from coast to coast in the US, including several recitals at GCNA Congresses and twice in The Springfield International Carillon Festival. While living in the Netherlands she played recitals around the country, including four at the Palace in Amsterdam. While living in England she gave regular recitals at the Bond Street Carillon in London and two in Loughborough. She was fortunate to have the opportunity to play un-official recitals in St. Petersburg, Russia and Seoul, South Korea. In 2014 she hosted the GCNA annual meeting in Denver. Lens and her family have lived in England, Ghana, New Orleans, Houston and Libya. Carol held the position of carillonneur at St. John the Divine Episcopal Church and at the Bell Tower Center, both in Houston. She was appointed University Carillonneur at The University of Denver January 5, 2010.

After her senior year in high school, Lens passed the Exam Recital to become Carillonneur member of the Guild of Carillonneurs in North America (GCNA). She was a judge and then chair of the Exam Committee for many years, and is a judge once more. She

CARILLONNEURS as President, having served as WCF Treasurer from 1990 until 2006. With a B.S. degree in Physics and a Master’s degree in teaching from the University of Chicago, Mr. Crawford is pleased to have initiated the first regular carillon instruction programs at four Chicago-area carillons. He supervised the 2007-2008 renovation of the 100-ton 72-bell University of Chicago carillon.

WYLIE CRAWFORD USA Wylie Crawford is the Senior University Carillonneur at the University of Chicago, having served for 31 years as University Carillonneur. He is also the Resident Carillonneur for the Chicago Botanic Garden in Glencoe, IL (since 1986) and was the first City Carillonneur for the Millennium Carillon in Naperville, IL. In 2020, he became the President of the Venice Carillon Foundation, Inc. and inaugurated the Florida Carillon Festival in that year. He is the Past President of the World Carillon Federation, a federation of 14 international associations that organizes conferences in countries with a carillon culture. Crawford served a record-breaking 11-year term

Crawford fulfilled the requirements of the Guild of Carillonneurs in North America to become a certified Carillonneur in 1977. During his forty-seven year membership in the Guild, he served three years as its Vice President and forty years as Chair of the Guild’s Membership Committee. He continues as a member of its Nominations committee. He has given guest recitals in Belgium, Canada, Denmark, France, Japan, Mexico, Netherlands, Sweden, and the U.S.

CARILLONNEURS Dublin, the Minister for Arts formally designated Carillon Playing in Cobh part of the Intangible Cultural Heritage of Ireland. A frequent guest recitalist throughout Europe, Russia, North America, Australia, New Zealand, South Africa and Japan, as well as on radio, television and recordings, Gebruers has been the recipient of several Travel Awards and a research grant from the Irish Arts Council and Department of Foreign Affairs, as well as a Tyrone Guthrie Centre – Cork County Council Regional Bursary and commissions from the Contemporary Music Centre Ireland and Alfred University (New York).

ADRIAN PATRICK GEBRUERS IRELAND Of Flemish-Irish parents, Adrian Patrick Gebruers holds the unique distinction of being the first Irish carillonneur in the long history of the instrument. A graduate of the National University of Ireland, he also studied at the Municipal School of Music in Cork (Ireland) and at the Universities of Salamanca and Navarra in Spain. He received his initial carillon tuition from his late father (Staf Gebruers) and subsequently studied under Jef Rottiers, Piet van den Broek and Eddy Mariën at the Royal Carillon School in Mechelen (Belgium). In 2021 he celebrates his fifty-first year as Carillonneur of St Colman&#39;s Cathedral in Cobh, a picturesque harbour town on Ireland&#39;s southern coast; in the summer of 2002 Cobh, and University College Cork, was the location for the 13th Congress of the World Carillon Federation and in the summer of 2003 of the IX Eurocarillon Festival. In 2019 at a ceremony in

A former Assistant Principal of Colaiste Muire in Cobh, he is lecturer in carillon studies at the Music Department of University College Cork. A founding Vice-President of Eurocarillon, he was Honorary President of the British Carillon Society from 1997 to 2000 and again from 2001 to 2006. In 1998 he took on the highest executive position in the carillon world on being elected President of the World Carillon Federation and in 2002 was unanimously reelected for a further four-year term. In 2005 he received from Pope John Paul II the very special honour of being made a Papal Knight of the Order of St Gregory the Great (KSG) with title Chevalier for services to the Church. Gebruers has become increasingly interested in composing and adapting music of the Irish traditional idiom for the carillon, an instrument that he believes is particularly suited to this genre. He is married to physiologist Dr. Elizabeth Gebruers and they have two sons, two daughters, and nine grandchildren.

FROM THE 1746 ANTWERP CARILLON BOOK

From Serenade I (1978) A Whimsy Barcarolle

MUSIC OF THE BAROQUE ERA

The Bard of Armagh Ernest R. Ball (The Streets of Laredo) Irish Traditional

MUSIC OF THE BAROQUE ERA

CARILLON MUSIC BY THE PERFORMER

Carrigdoun* Irish Traditional Country Gardens (1728, English) arr. Percy Grainger (1882-1961) TO CONCLUDE The Gartan Mother’s Lullaby Irish Traditional from Donegal Carolana** Turlough Carolan (1670-1738) * Like many Irish melodies, there are several variants of Carrigdoun, also known as Bendemeer’s Stream by Thomas Moore and The Mountains of Mourne by Percy French, all three of which feature in this arrangement.

** Carolan was the last and one of the greatest of the Irish harpers. This is a selection of some of his most celebrated music which displays a certain Baroque influence, specifically that of the Italian composer Francesco Geminiani (16871762) who spent the latter years of his life living and teaching in Ireland.

Join us in celebrating one of the world’s greatest carillons, Bok Tower Gardens’ Singing Tower. With performances by world-renowned carillonneurs, enjoy a renaissance of this unique musical instrument through debut performances of new compositions and music performed throughout the 500-year history of the carillon. 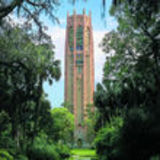