What is Europe? / Production Notes 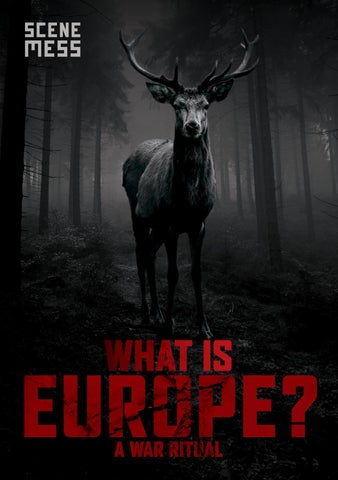 WHAT IS EUROPE? Europe is a utopia. With its name we often associate cultural, historic, and humanistic values, rule of law, appreciation and importance of quality life. The road to Europe is an imaginary road to a better tomorrow and happier future. However, that future cannot be seen on the horizon. The European reality indeed is something else, but we couldn’t care less about it. Even though our geographical and cultural identity is unmistakably European, we remain on the outside of the European political and ideological borders. Not unlike those who fail to live up to the standards or satisfy the criteria, and who don’t meet the specifications, we perceive Europe as the primary goal, desperately striving to achieve it. Despite this, we tend to see Europe with too critical an eye, and begin to be more judgmental of it than of ourselves. At the same time, we want to be an equal part of Europe, but we are not doing enough to change the circumstances at home. Our desire to join the European Union and live according to its standards thus ceases to be a joint effort and becomes a personal, fascinating quest for life in one of the EU countries. But, we would be better off if Europe just conquered us, that is, put things in order or destroyed us. While trying to rid ourselves of the last remnants of our Yugoslav identity, we simply overlook the generation that is yet to settle the score after the breakup of Yugoslavia – the generation that lost its country and its identity with it. We also tend to forget those who found their home in these new national, or, more precisely, nationalistic countries. With the breakup of Yugoslavia, they just went to their homes. The young generation, most of them born during the war, is now nearing its political maturity. In search for its own identity, the new, post-Yugoslav generation has been frantically and mindlessly embracing nationalism as if it were a religious sect. The history is beyond forgiveness.

Gone is the ideal of a safe consumer society. A flood of refugees challenges the values upon which the European politics, culture and lifestyle are based on. Islam becomes more and more popular. Of course, Christians are also standing their ground. The foundations of a country as a secular entity have been shaken to the core. And let’s not forget money. Banks will do their thing. The left and liberals, as well as open societies, hypocritically tolerate the emerging right traditionalism, hoping it will do the trick. Even the oppressor wants his human rights protected. Religion is taking its toll. From the perspective of complete outsiders, some of us secretly desire that the global political changes will bring about the breakup of the European Union, in the similar fashion they brought about the breakup of Yugoslavia in the ninety eighties. Europe will not break up. It may transform and reshape itself, embracing new, not necessarily positive values. The far right sees the settlement of Europe by non-Europeans as an assault on European identity. Fear. Radical actions. Terror. Defense. Questionable is the desire for integration, as is the possibility of such a community to succeed. The rules are clear. If you live here, you live by our laws. The rules are not clear. There is no integration. There is only assimilation or failure. Life changes…and the world does, too. The play is based on three essays by Laszlo Vegel, collectively published under the title Stories from the Lower Areas, as well as on the exercises and improvisations the actors had thought out within the theatrical process. Theater is above all fun. The knowledge of a self. What is Europe is a question. What is Europe is an answer. There is no ultimate victory. The unburied corpse of Yugoslavia is staring at us folks populating the border areas of the Barbaricum. András Urbán and Bojana Vidosavljević

“Central-Eastern Europeans, in all their freedom, have slowly but surely lost their identity. The memory of it sometimes emerges from the deep down in our guts, but we have to block it, or act as if it were an ordinary tourist attraction. The gentry of New York, Landon, Berlin and Paris are sometimes fond of our Balkan exoticism. They would gladly hear a song or see a Kusturica movie. The Parisian ladies would scream silently, oh, what an exotic world! In order to please them, we put our Balkan mask on our faces, war-paint copies of our true selves, and stage a Balkan historical play for them. All this, however, is only a flirt, pure fun, dose of folklore nostalgia for the lounge globalists. To accommodate their requests, we sometimes serve them with a slice of it. It is better they applaud to these, than poke their noses into the reality. It didn’t take long for the true faces of the Western Europe and Balkans to appear, the faces we had so eagerly concealed. The faces which scream of countries and nations suspiciously eyeing each other and bursting with nationalism and populism. This region has turned to the right so violently that its back started to ache. It wanted to be more extreme right than the West.

The freedom has exposed us. Stripped us naked. That other face, hidden behind the adjusted masks – the face that Communism and its dictatorship had forced to hide – our illusions and ideals put a make up of an imaginary Central Europe all over it. The dream of Central Europe, dreamed by Kundera, Conrad and Magris, has shattered. The illusions have, too. It turned out we falsified our own biographies, while the rest has remained the same. Fathers have given up on their past, their sons have given up on them. We’re now marking time with our own illusions long lost. Neither Socialism, dying in pains, nor the Soviet Empire, that had allegedly invaded the Central Europe, is to blame. We are free – we admit that with a certain Central-Eastern European irony, for we know our freedom is but a mask. Long live the freedom, which is worth nothing! Long live A WAR RITUAL

András Urbán Born in 1970, in Senta. At the age of seventeen, he formed an independent theater and literary workshop (as its author, director, and actor). Later, he formed a theater troupe Aiowa, which treated the theater as a specific, yet artistically all-encompassing ideological action. He enrolled in the program for directing at the Academy of Art in Novi Sad, where he studied film and theater directing, and directed plays in the National Theater of Subotica. In the midnineties, he abandoned his studies, as well as all theater work, and lived reclusively for years. In 2000, he obtained a degree in directing, in the class of professors Vlatko Gilić and Bora Drašković, and once again began intensively working in the theater. With the support of Szeged MASZK and his own ensemble, he also created “independent” theater plays. He is the founder of the international theater festival Desiré Central Station, has worked in Novi Sad and Belgrade, lead art workshops in Romania, and went on a study trip to Japan. Since 2005, he is the director of the Hungarian City Theater Dezső Kosztolányi in Subotica. He considers the theater as an illuminated area of an occasionally provocative action, where the specific forms of artistic reality are thought, spoken, and organized. For him, the play is the form of communication and another reality which exists for itself, but is born through the relationship between the performer, performed reality, and the viewer. He achieves the directing through communication

with the actor. He directed, among others: “The Lizards”, “The Dew”; G. Buchner, “Woyzeck”; Shakespeare, “Hamlet”; Dejan Dukovski, “Fuck the Motherfucker Who Started This”; F. Arrabal, “Picnic on the Battlefield”; Jordan Radičkov, “Lazarica” (Balkanstage Bulgaria); Janoš Pilinski/ Urban, “The Children”; Beckett, “Waiting for Godot”; Sylvia Plath/ Urban, “The Girl who Barked at the Moon”; Shakespeare, “Taming of the Shrew”; Brecht, “Hardcore Machine” (Berlin); D. Kovačević, “The Assembly Centre”; Danilo Kiš, “Turbo Paradiso” (based on the short story “The Encyclopaedia of the Dead”). Short movies: “Someone and Someone”, “Glass” (AU Novi Sad–TV Novi Sad). He received numerous awards and recognitions.

* Performance is performed on a proscenium stage.

SCENE MESS Scene MESS is the production department of the MESS International Theater Festival. Following numerous productions and coproductions between 1993 and 2014, MESS is now formally participating in theatrical programming, in addition to its festival activities. As a theatrical company, MESS has produced and co-produced 75 plays. It has collaborated with 59 theater houses and companies from 12 different countries. In addition, it staged plays together with the Yugoslav Drama Theater and BITEF from Belgrade, Montenegrin National Theater and Budva Theater City, &amp;TD Theater from Zagreb, Croatian National Theater Ivan noble Zajc from Rijeka, Zagreb Youth Theater, Ex Ponto Theater from Ljubljana and Small Drama Theater of Bitola. MESS has also collaborated with some of the most renowned international theater companies, such as Glob Theater Bordeaux, Corte Sconta from Milan, De Brakke Gron from Amsterdam, and Schaubuehne am Lehniner Platz from Berlin. 336 actors and 43 directors took part in these productions and co-productions. Scene MESS is indented as a place of artistic freedom. It is a place where artists can explore new forms, question and deconstruct literary classics, write texts and host pre-premieres, make their own projects. It is perhaps, above all, a space where they can take risks, because deep inside we believe there is no progress in art without risk taking and venturing into uncharted territories. The results of which can be unpredictable and different, but never uninteresting or superficial.

the development of theater in BiH. When Scene MESS was first established, it was a utopian idea. A new theater in Sarajevo. Only a year later, Scene MESS has its monthly repertoire, currently ten plays in it, and new projects scheduled for 2016. It has chosen co-production as its mode of operation, since it allows for a creative exchange between countries and theatrical companies, but also advances culture. Only in 2015, Scene MESS worked with the Zagreb Youth Theater, BITEF Theater from Belgrade, Croatian National Theater from Mostar, National Theater of Republika Srpska from Banja Luka, Bosnian National Theater from Zenica, Heartefact Fund from Belgrade, Budva Theater City, Ulysses Theater from Brijuni, Sarajevo War Theater, Kamerni teatar â&amp;#x20AC;&amp;#x2DC;55 from Sarajevo, Croatian National Theater from Rijeka. Their plays have won numerous awards at BiH theater festivals, both regional and international. Scene MESS has staged plays in numerous venues throughout BiH, thanks to the hospitality of our colleagues from BiH theater houses. Scene MESS, likewise, plans to return the favor, thus creating a meeting point between regional and international collaborations â&amp;#x20AC;&amp;#x201C; a place that exudes diversity and praises otherness.

Scene MESS aims at creating an environment in which artistic teams working on plays can be put together based on the individual sensibilities of their members. Scene MESS does not have a permanent ensemble. It does not have its team of authors either. Each play puts together a new team which allows for a greater fluidity, dynamics and innovativeness, and, at the same time, fosters

What is Europe? / Production Notes 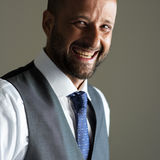