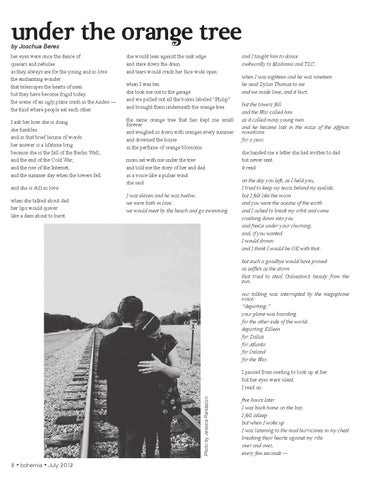 under the orange tree by Joschua Beres

her eyes were once the dance of quasars and nebulae as they always are for the young and in love. the enchanting wonder that telescopes the hearts of men. but they have become frigid today. the scene of an ugly plane crash in the Andes­— the kind where people eat each other.

she would lean against the sink edge and stare down the drain and tears would crack her face wide open.

I ask her how she is doing. she fumbles and in that brief lacuna of words her answer is a lifetime long because she is the fall of the Berlin Wall; and the end of the Cold War; and the rise of the Internet; and the summer day when the towers fell.

the same orange tree that has kept me small forever and weighed us down with oranges every summer and drowned the house in the perfume of orange blossoms.

and she is still in love. when she talked about dad her lips would quiver like a dam about to burst.

when I was ten she took me out to the garage and we pulled out all the boxes labeled “Philip” and brought them underneath the orange tree.

mom sat with me under the tree and told me the story of her and dad in a voice like a pulsar wind she said: I was eleven and he was twelve. we were both in love. we would meet by the beach and go swimming

and I taught him to dance awkwardly to Madonna and TLC. when I was eighteen and he was nineteen he read Dylan Thomas to me and we made love, and it hurt. but the towers fell and the War called him as it called many young men and he became lost in the maze of the Afghan mountains for a year. she handed me a letter she had written to dad but never sent. it read: on the day you left, as I held you, I tried to keep my tears behind my eyelids. but I felt like the moon and you were the oceans of the earth and I ached to break my orbit and come crashing down into you and freeze under your churning. and, if you wanted I would drown and I think I would be OK with that. but such a goodbye would have proved as selfish as the storm that tried to steal Galveston’s beauty from the sun. our talking was interrupted by the megaphone voice: “departing.” your plane was boarding for the other side of the world. departing Killeen for Dallas for Atlanta for Ireland for the War.

I paused from reading to look up at her but her eyes were silent. I read on:

five hours later I was back home on the bay. I fell asleep but when I woke up I was listening to the mad hurricanes in my chest breaking their hearts against my ribs over and over, every few seconds­— 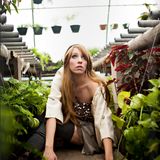