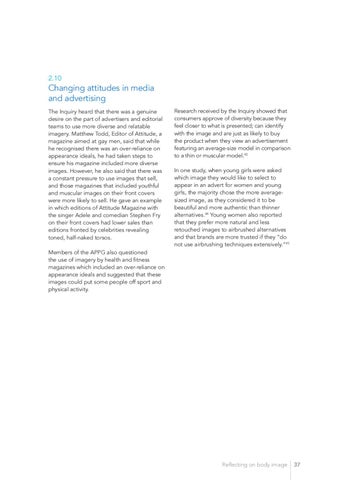 Changing attitudes in media and advertising The Inquiry heard that there was a genuine desire on the part of advertisers and editorial teams to use more diverse and relatable imagery. Matthew Todd, Editor of Attitude, a magazine aimed at gay men, said that while he recognised there was an over-reliance on appearance ideals, he had taken steps to ensure his magazine included more diverse images. However, he also said that there was a constant pressure to use images that sell, and those magazines that included youthful and muscular images on their front covers were more likely to sell. He gave an example in which editions of Attitude Magazine with the singer Adele and comedian Stephen Fry on their front covers had lower sales than editions fronted by celebrities revealing toned, half-naked torsos.

Research received by the Inquiry showed that consumers approve of diversity because they feel closer to what is presented; can identify with the image and are just as likely to buy the product when they view an advertisement featuring an average-size model in comparison to a thin or muscular model.43 In one study, when young girls were asked which image they would like to select to appear in an advert for women and young girls, the majority chose the more averagesized image, as they considered it to be beautiful and more authentic than thinner alternatives.44 Young women also reported that they prefer more natural and less retouched images to airbrushed alternatives and that brands are more trusted if they â&#x20AC;&#x153;do not use airbrushing techniques extensively.â&#x20AC;?45

Members of the APPG also questioned the use of imagery by health and fitness magazines which included an over-reliance on appearance ideals and suggested that these images could put some people off sport and physical activity. 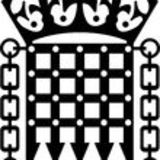 Report from the All Party Parliamentary Group on Body Image and Central YMCA, which examines the causes and consequences of body image dissa...

Report from the All Party Parliamentary Group on Body Image and Central YMCA, which examines the causes and consequences of body image dissa...