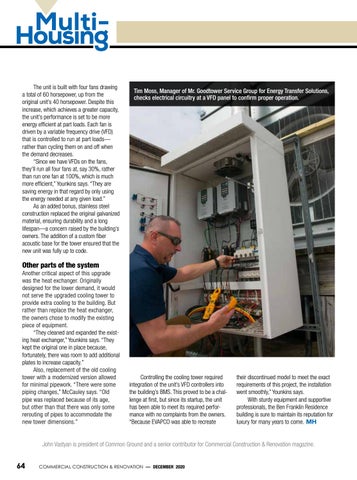 The unit is built with four fans drawing a total of 60 horsepower, up from the original unit’s 40 horsepower. Despite this increase, which achieves a greater capacity, the unit’s performance is set to be more energy efficient at part loads. Each fan is driven by a variable frequency drive (VFD) that is controlled to run at part loads— rather than cycling them on and off when the demand decreases. “Since we have VFDs on the fans, they’ll run all four fans at, say 30%, rather than run one fan at 100%, which is much more efficient,” Younkins says. “They are saving energy in that regard by only using the energy needed at any given load.” As an added bonus, stainless steel construction replaced the original galvanized material, ensuring durability and a long lifespan—a concern raised by the building’s owners. The addition of a custom fiber acoustic base for the tower ensured that the new unit was fully up to code.

Other parts of the system

Another critical aspect of this upgrade was the heat exchanger. Originally designed for the lower demand, it would not serve the upgraded cooling tower to provide extra cooling to the building. But rather than replace the heat exchanger, the owners chose to modify the existing piece of equipment. “They cleaned and expanded the existing heat exchanger,” Younkins says. “They kept the original one in place because, fortunately, there was room to add additional plates to increase capacity.” Also, replacement of the old cooling tower with a modernized version allowed for minimal pipework. “There were some piping changes,” McCauley says. “Old pipe was replaced because of its age, but other than that there was only some rerouting of pipes to accommodate the new tower dimensions.”

Controlling the cooling tower required integration of the unit’s VFD controllers into the building’s BMS. This proved to be a challenge at first, but since its startup, the unit has been able to meet its required performance with no complaints from the owners. “Because EVAPCO was able to recreate

their discontinued model to meet the exact requirements of this project, the installation went smoothly,” Younkins says. With sturdy equipment and supportive professionals, the Ben Franklin Residence building is sure to maintain its reputation for luxury for many years to come. MH

John Vastyan is president of Common Ground and a senior contributor for Commercial Construction & Renovation magazine.