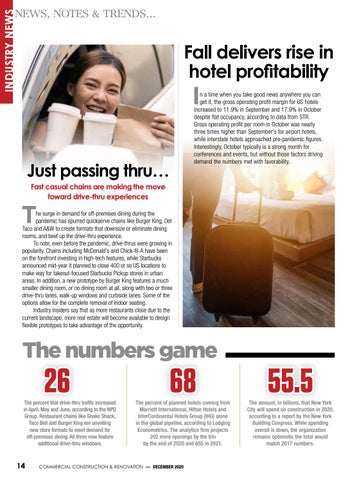 n a time when you take good news anywhere you can get it, the gross operating profit margin for US hotels increased to 11.9% in September and 17.9% in October despite flat occupancy, according to data from STR. Gross operating profit per room in October was nearly three times higher than September's for airport hotels, while interstate hotels approached pre-pandemic figures. Interestingly, October typically is a strong month for conferences and events, but without those factors driving demand the numbers met with favorability.

he surge in demand for off-premises dining during the pandemic has spurred quickserve chains like Burger King, Del Taco and A&W to create formats that downsize or eliminate dining rooms, and beef up the drive-thru experience. To note, even before the pandemic, drive-thrus were growing in popularity. Chains including McDonald’s and Chick-fil-A have been on the forefront investing in high-tech features, while Starbucks announced mid-year it planned to close 400 or so US locations to make way for takeout-focused Starbucks Pickup stores in urban areas. In addition, a new prototype by Burger King features a much smaller dining room, or no dining room at all, along with two or three drive-thru lanes, walk-up windows and curbside lanes. Some of the options allow for the complete removal of indoor seating. Industry insiders say that as more restaurants close due to the current landscape, more real estate will become available to design flexible prototypes to take advantage of the opportunity.

The percent that drive-thru traffic increased in April, May and June, according to the NPD Group. Restaurant chains like Shake Shack, Taco Bell and Burger King are unveiling new store formats to meet demand for off-premises dining. All three now feature additional drive-thru windows.

The percent of planned hotels coming from Marriott International, Hilton Hotels and InterContinental Hotels Group (IHG) alone in the global pipeline, according to Lodging Econometrics. The analytics firm projects 202 more openings by the trio by the end of 2020 and 655 in 2021.

The amount, in billions, that New York City will spend on construction in 2020, according to a report by the New York Building Congress. While spending overall is down, the organization remains optimistic the total would match 2017 numbers.