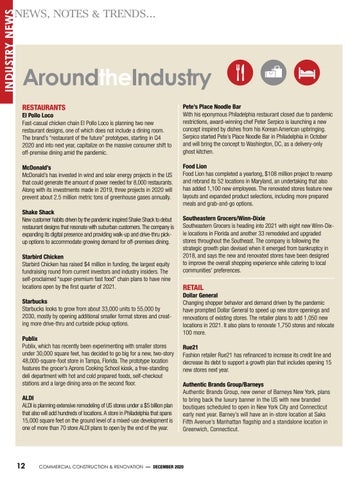 McDonald’s McDonald’s has invested in wind and solar energy projects in the US that could generate the amount of power needed for 8,000 restaurants. Along with its investments made in 2019, three projects in 2020 will prevent about 2.5 million metric tons of greenhouse gases annually.

Food Lion Food Lion has completed a yearlong, $108 million project to revamp and rebrand its 52 locations in Maryland, an undertaking that also has added 1,100 new employees. The renovated stores feature new layouts and expanded product selections, including more prepared meals and grab-and-go options.

El Pollo Loco Fast-casual chicken chain El Pollo Loco is planning two new restaurant designs, one of which does not include a dining room. The brand’s “restaurant of the future” prototypes, starting in Q4 2020 and into next year, capitalize on the massive consumer shift to off-premise dining amid the pandemic.

Shake Shack New customer habits driven by the pandemic inspired Shake Shack to debut restaurant designs that resonate with suburban customers. The company is expanding its digital presence and providing walk-up and drive-thru pickup options to accommodate growing demand for off-premises dining. Starbird Chicken Starbird Chicken has raised $4 million in funding, the largest equity fundraising round from current investors and industry insiders. The self-proclaimed “super-premium fast food” chain plans to have nine locations open by the first quarter of 2021. Starbucks Starbucks looks to grow from about 33,000 units to 55,000 by 2030, mostly by opening additional smaller format stores and creating more drive-thru and curbside pickup options. Publix Publix, which has recently been experimenting with smaller stores under 30,000 square feet, has decided to go big for a new, two-story 48,000-square-foot store in Tampa, Florida. The prototype location features the grocer’s Aprons Cooking School kiosk, a free-standing deli department with hot and cold prepared foods, self-checkout stations and a large dining area on the second floor. ALDI ALDI is planning extensive remodeling of US stores under a $5 billion plan that also will add hundreds of locations. A store in Philadelphia that spans 15,000 square feet on the ground level of a mixed-use development is one of more than 70 store ALDI plans to open by the end of the year.

Southeastern Grocers/Winn-Dixie Southeastern Grocers is heading into 2021 with eight new Winn-Dixie locations in Florida and another 33 remodeled and upgraded stores throughout the Southeast. The company is following the strategic growth plan devised when it emerged from bankruptcy in 2018, and says the new and renovated stores have been designed to improve the overall shopping experience while catering to local communities’ preferences.

Dollar General Changing shopper behavior and demand driven by the pandemic have prompted Dollar General to speed up new store openings and renovations of existing stores. The retailer plans to add 1,050 new locations in 2021. It also plans to renovate 1,750 stores and relocate 100 more. Rue21 Fashion retailer Rue21 has refinanced to increase its credit line and decrease its debt to support a growth plan that includes opening 15 new stores next year. Authentic Brands Group/Barneys Authentic Brands Group, new owner of Barneys New York, plans to bring back the luxury banner in the US with new branded boutiques scheduled to open in New York City and Connecticut early next year. Barney’s will have an in-store location at Saks Fifth Avenue’s Manhattan flagship and a standalone location in Greenwich, Connecticut.