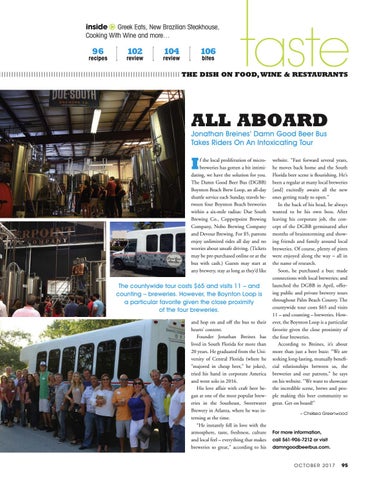 f the local proliferation of microbreweries has gotten a bit intimidating, we have the solution for you. The Damn Good Beer Bus (DGBB) Boynton Beach Brew Loop, an all-day shuttle service each Sunday, travels between four Boynton Beach breweries within a six-mile radius: Due South Brewing Co., Copperpoint Brewing Company, Nobo Brewing Company and Devour Brewing. For $5, patrons enjoy unlimited rides all day and no worries about unsafe driving. (Tickets may be pre-purchased online or at the bus with cash.) Guests may start at any brewery, stay as long as they’d like

The countywide tour costs $65 and visits 11 – and counting – breweries. However, the Boynton Loop is a particular favorite given the close proximity of the four breweries. and hop on and off the bus to their hearts’ content. Founder Jonathan Breines has lived in South Florida for more than 20 years. He graduated from the University of Central Florida (where he “majored in cheap beer,” he jokes), tried his hand in corporate America and went solo in 2016. His love affair with craft beer began at one of the most popular breweries in the Southeast, Sweetwater Brewery in Atlanta, where he was interning at the time. “He instantly fell in love with the atmosphere, taste, freshness, culture and local feel – everything that makes breweries so great,” according to his

website. “Fast forward several years, he moves back home and the South Florida beer scene is flourishing. He’s been a regular at many local breweries [and] excitedly awaits all the new ones getting ready to open.” In the back of his head, he always wanted to be his own boss. After leaving his corporate job, the concept of the DGBB germinated after months of brainstorming and showing friends and family around local breweries. Of course, plenty of pints were enjoyed along the way – all in the name of research. Soon, he purchased a bus; made connections with local breweries; and launched the DGBB in April, offering public and private brewery tours throughout Palm Beach County. The countywide tour costs $65 and visits 11 – and counting – breweries. However, the Boynton Loop is a particular favorite given the close proximity of the four breweries. According to Breines, it’s about more than just a beer buzz: “We are seeking long-lasting, mutually beneficial relationships between us, the breweries and our patrons,” he says on his website. “We want to showcase the incredible scene, brews and people making this beer community so great. Get on board!” – Chelsea Greenwood