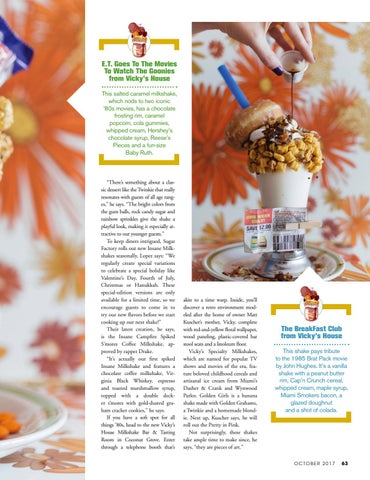 “There’s something about a classic dessert like the Twinkie that really resonates with guests of all age ranges,” he says. “The bright colors from the gum balls, rock candy sugar and rainbow sprinkles give the shake a playful look, making it especially attractive to our younger guests.” To keep diners intrigued, Sugar Factory rolls out new Insane Milkshakes seasonally, Lopez says: “We regularly create special variations to celebrate a special holiday like Valentine’s Day, Fourth of July, Christmas or Hanukkah. These special-edition versions are only available for a limited time, so we encourage guests to come in to try our new flavors before we start cooking up our next shake!” Their latest creation, he says, is the Insane Campfire Spiked S’mores Coffee Milkshake, approved by rapper Drake. “It’s actually our first spiked Insane Milkshake and features a chocolate coffee milkshake, Virginia Black Whiskey, espresso and toasted marshmallow syrup, topped with a double decker s’mores with gold-dusted graham cracker cookies,” he says. If you have a soft spot for all things ’80s, head to the new Vicky’s House Milkshake Bar & Tasting Room in Coconut Grove. Enter through a telephone booth that’s

akin to a time warp. Inside, you’ll discover a retro environment modeled after the home of owner Matt Kuscher’s mother, Vicky, complete with red-and-yellow floral wallpaper, wood paneling, plastic-covered bar stool seats and a linoleum floor. Vicky’s Specialty Milkshakes, which are named for popular TV shows and movies of the era, feature beloved childhood cereals and artisanal ice cream from Miami’s Dasher & Crank and Wynwood Parlor. Golden Girls is a banana shake made with Golden Grahams, a Twinkie and a homemade blondie. Next up, Kuscher says, he will roll out the Pretty in Pink. Not surprisingly, these shakes take ample time to make since, he says, “they are pieces of art.”