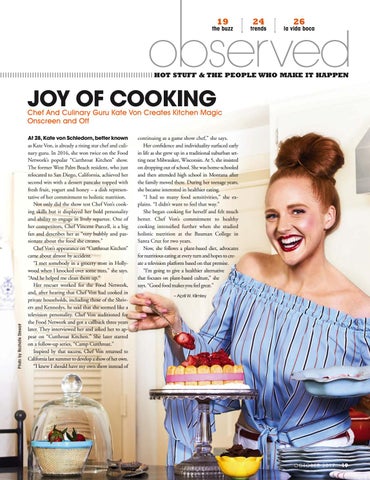 HOT STUFF &amp; THE PEOPLE WHO MAKE IT HAPPEN

as Kate Von, is already a rising star chef and culinary guru. In 2016, she won twice on the Food Network’s popular “Cutthroat Kitchen” show. The former West Palm Beach resident, who just relocated to San Diego, California, achieved her second win with a dessert pancake topped with fresh fruit, yogurt and honey – a dish representative of her commitment to holistic nutrition. Not only did the show test Chef Von’s cooking skills but it displayed her bold personality and ability to engage in lively repartee. One of her competitors, Chef Vincent Purcell, is a big fan and describes her as “very bubbly and passionate about the food she creates.” Chef Von’s appearance on “Cutthroat Kitchen” came about almost by accident. “I met somebody in a grocery store in Hollywood when I knocked over some nuts,” she says. “And he helped me clean them up.” Her rescuer worked for the Food Network, and, after hearing that Chef Von had cooked in private households, including those of the Shrivers and Kennedys, he said that she seemed like a television personality. Chef Von auditioned for the Food Network and got a callback three years later. They interviewed her and asked her to appear on “Cutthroat Kitchen.” She later starred on a follow-up series, “Camp Cutthroat.” Inspired by that success, Chef Von returned to California last summer to develop a show of her own. “I knew I should have my own show instead of

continuing as a game show chef,” she says. Her confidence and individuality surfaced early in life as she grew up in a traditional suburban setting near Milwaukee, Wisconsin. At 5, she insisted on dropping out of school. She was home-schooled and then attended high school in Montana after the family moved there. During her teenage years, she became interested in healthier eating. “I had so many food sensitivities,” she explains. “I didn’t want to feel that way.” She began cooking for herself and felt much better. Chef Von’s commitment to healthy cooking intensified further when she studied holistic nutrition at the Bauman College in Santa Cruz for two years. Now, she follows a plant-based diet, advocates for nutritious eating at every turn and hopes to create a television platform based on that premise. “I’m going to give a healthier alternative that focuses on plant-based culture,” she says. “Good food makes you feel great.” – April W. Klimley