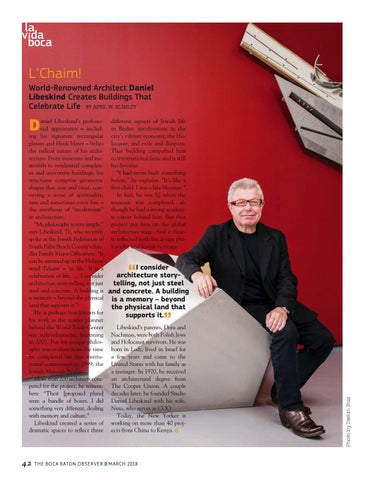 L’Chaim! World-Renowned Architect Daniel Libeskind Creates Buildings That Celebrate Life BY APRIL W. KLIMLEY aniel Libeskind’s professorial appearance – including his signature rectangular glasses and black blazer – belies the radical nature of his architecture. From museums and memorials to residential complexes and university buildings, his structures comprise geometric shapes that soar and twist, conveying a sense of spirituality, awe and sometimes even loss – the antithesis of “modernism” in architecture. “My philosophy is very simple,” says Libeskind, 71, who recently spoke at the Jewish Federation of South Palm Beach County’s Sandler Family Major Gifts event. “It can be summed up in the Hebrew word ‘l’chaim’ – ‘to life.’ It is a celebration of life. … I consider architecture story-telling, not just steel and concrete. A building is a memory – beyond the physical land that supports it.” He is perhaps best known for his work as the master planner behind the World Trade Center site redevelopment, beginning in 2002. But his unique philosophy was evident from the time he completed his first institutional commission in 1999: the Jewish Museum Berlin. More than 200 architects competed for the project, he remembers: “Their [proposed plans] were a bundle of boxes. I did something very different, dealing with memory and culture.” Libeskind created a series of dramatic spaces to reflect three

different aspects of Jewish life in Berlin: involvement in the city’s vibrant economy; the Holocaust; and exile and diaspora. That building catapulted him to international fame and is still his favorite. “I had never built something before,” he explains. “It’s like a first child. I was a late bloomer.” In fact, he was 52 when the museum was completed, although he had a strong academic career behind him. But that project put him on the global architecture stage. And it clearly reflected both his design philosophy and Jewish heritage.

telling, not just steel and concrete. A building is a memory – beyond the physical land that supports it.

Libeskind’s parents, Dora and Nachman, were both Polish Jews and Holocaust survivors. He was born in Lodz, lived in Israel for a few years and came to the United States with his family as a teenager. In 1970, he received an architectural degree from The Cooper Union. A couple decades later, he founded Studio Daniel Libeskind with his wife, Nina, who serves as COO. Today, the New Yorker is working on more than 40 projects from China to Kenya. O

The Authority on Boca & Beyond

The Authority on Boca & Beyond