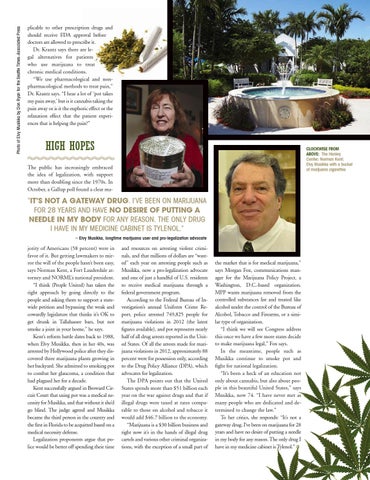 plicable to other prescription drugs and should receive FDA approval before doctors are allowed to prescribe it. Dr. Krantz says there are legal alternatives for patients who use marijuana to treat chronic medical conditions. “We use pharmacological and nonpharmacological methods to treat pain,” Dr. Krantz says. “I hear a lot of ‘pot takes my pain away,’ but is it cannabis taking the pain away or is it the euphoric effect or the relaxation effect that the patient experiences that is helping the pain?”

CLOCKWISE FROM ABOVE: The Hanley Center; Norman Kent; Elvy Musikka with a bucket of marijuana cigarettes

The public has increasingly embraced the idea of legalization, with support more than doubling since the 1970s. In October, a Gallup poll found a clear ma-

“IT’S NOT A GATEWAY DRUG. I’VE BEEN ON MARIJUANA FOR 28 YEARS AND HAVE NO DESIRE OF PUTTING A NEEDLE IN MY BODY FOR ANY REASON. THE ONLY DRUG I HAVE IN MY MEDICINE CABINET IS TYLENOL.” – Elvy Musikka, longtime marijuana user and pro-legalization advocate

jority of Americans (58 percent) were in favor of it. But getting lawmakers to mirror the will of the people hasn’t been easy, says Norman Kent, a Fort Lauderdale attorney and NORML’s national president. “I think (People United) has taken the right approach by going directly to the people and asking them to support a statewide petition and bypassing the weak and cowardly legislature that thinks it’s OK to get drunk in Tallahassee bars, but not smoke a joint in your home,” he says. Kent’s reform battle dates back to 1988, when Elvy Musikka, then in her 40s, was arrested by Hollywood police after they discovered three marijuana plants growing in her backyard. She admitted to smoking pot to combat her glaucoma, a condition that had plagued her for a decade. Kent successfully argued in Broward Circuit Court that using pot was a medical necessity for Musikka, and that without it she’d go blind. The judge agreed and Musikka became the third person in the country and the first in Florida to be acquitted based on a medical necessity defense. Legalization proponents argue that police would be better off spending their time

and resources on arresting violent criminals, and that millions of dollars are “wasted” each year on arresting people such as Musikka, now a pro-legalization advocate and one of just a handful of U.S. residents to receive medical marijuana through a federal government program. According to the Federal Bureau of Investigation’s annual Uniform Crime Report, police arrested 749,825 people for marijuana violations in 2012 (the latest figures available), and pot represents nearly half of all drug arrests reported in the United States. Of all the arrests made for marijuana violations in 2012, approximately 88 percent were for possession only, according to the Drug Policy Alliance (DPA), which advocates for legalization. The DPA points out that the United States spends more than $51 billion each year on the war against drugs and that if illegal drugs were taxed at rates comparable to those on alcohol and tobacco it would add $46.7 billion to the economy. “Marijuana is a $30 billion business and right now it’s in the hands of illegal drug cartels and various other criminal organizations, with the exception of a small part of

the market that is for medical marijuana,” says Morgan Fox, communications manager for the Marijuana Policy Project, a Washington, D.C.-based organization. MPP wants marijuana removed from the controlled substances list and treated like alcohol under the control of the Bureau of Alcohol, Tobacco and Firearms, or a similar type of organization. “I think we will see Congress address this once we have a few more states decide to make marijuana legal,” Fox says. In the meantime, people such as Musikka continue to smoke pot and fight for national legalization. “It’s been a heck of an education not only about cannabis, but also about people in this beautiful United States,” says Musikka, now 74. “I have never met as many people who are dedicated and determined to change the law.” To her critics, she responds: “It’s not a gateway drug. I’ve been on marijuana for 28 years and have no desire of putting a needle in my body for any reason. The only drug I have in my medicine cabinet is Tylenol.” O