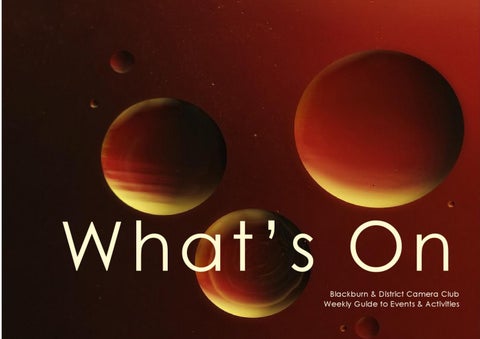 This Week’s Cover Image An abstract image by Andy Phillips

Adrian Almond - landscape photographer and guru to some of our members is returning to the club. Following on the success of last year&#39;s visit Adrian said he is proud to return to Blackburn &amp; District Camera Club and described it as returning home. Adrian&#39;s return comes complete with a whole new talk and a set of images from his time spent in Cornwall and Canada. If last year&#39;s lecture is anything to go by then this is one lecture you will not want to miss

November 7 The Extravaganza Margaret and John Sixsmith from the Wirral (both ARPS) will be giving a lecture and judging an interclub competition. Clubs from across the North West have been invited and at least five clubs will take part

Pie and Peas Supper Results of Mission Impossible 11 and a presentation of members best lightPlease bring eight mounted prints to hearted images of the year be judged on the night. After each round some prints will be removed and their authors will take no more part. The remaining authors present another print and the process repeats until only one print remains. There will be also be a competition for digital images, details will be given closer to the time

12 Presidents Evening Judith Marr Will be entertaining us. Will members please submit up to 8 of your best digital images of the year to Mick Park humorous and light-hearted images are especially welcome. These will we presented on 19 December

Trips &amp; Outings Sunday 20th November 10:00 am Skippool Creek, Thornton, Nr Cleveleys Tucked away in a bend in the Wyre estuary stands Skippool Creek. A scene that has little changed since the 1900′s. Skippool Creek was first settled by the Saxons ,its name deriving from the Saxon word skiffs. The area came to prominence in the 1700′s when it was the main

port on the River Wyre before the development of Fleetwood.Ships of up to 200 tonnes would unload cargoes from around the world with flax and cotton for the Lancashire mills.

glers and press gangs looking for recruits for the Royal navy. The opening of the railway to Fleetwood in 1840 quickly brought about the demise of the creek.

It was also renowned as a centre for cockInfo provided by Northwest Scenes fighting as well as being a haunt for smughttp://visitnorthwest.wordpress.c om/2009/05/31/a-visit-toskippool-creek/

Skippool Creek is where the Main Dyke flows into the Wyre Estuary west of Shard Bridge. Access to the area can be viewed from Wyre Road, Skippool and the public footpath between Old Mains Lane and

Shard Bridge. The east side of the river can be viewed from the public footpath between Shard Bridge and Saltmarsh Lane, Hambleton. The mudflats and south banks provide a feeding area and nocturnal roost for waders and wildfowl. The best times to visit are at two hours before high tide or one hour after high tide to low water. In winter large flocks of Lapwing, Curlew and Redshank are joined by Dunlin,

The whole area attracts raptors with PerRinged Plover and Black-tailed Godwit. Shelduck and Mallard are the commonest egrine, Merlin and Sparrowhawk are seen irregularly during most winters. of the wildfowl with a few Teal often present. Past rarities include redhead Smew, Little Egret, White-rumped Sandpiper (twice), Spring and autumn migration brings varying numbers of Ringed Plover, Dunlin, Great Knot and 3 Ring-billed Gulls. Black-tailed Godwit, Greenshank, Whimbrel and Common Sandpiper. In some autumns parties of Little Stint and Curlew Sandpiper are seen with occasional Ruff and Spotted Redshank. The gathering of gulls on the sandbanks here sometimes contain rarer species; Mediterranean Gull is regular

Join M6 north and turn onto M55 The saltmarshes attract flocks of finches Leave M55 @ Junction 3 and turn right and skylarks with smaller numbers of pipits and wagtails. These are best seen onto the A585 sign posted Fleetwood on high tides from the footpath leading At the traffic Lights with a glass statue on south from Hambleton. Choose a very the left – turn left. high tide, arrive early and watch for the birds as they are moved by the incoming Stay on this road but as you approach the traffic lights make sure that you get into tide. Water Pipits are sometimes seen amongst the Rock Pipits, and Jack Snipe the right hand lane. As you turn to the right you are still on the A585 often accompany the Snipe. Please watch your speed –there are several speed cameras on this stretch of

road. Carry on through a set of traffic lights and the village of Singleton (Could it be Bobs place) Follow the Skippool Creek brown Information sign turning right at the roundabout. Immediately after the roundabout take the first turning right passing a pub on your left called the Thornton Lodge. Continue down this narrow road until you see a large â&amp;#x20AC;&amp;#x2DC;free car park on your left. Approx 30 miles from Blackburn

Other Events November On Friday 18th

Same night Preston Photographic Society have An evening with Colin Prior

Help We hope that by producing What&#39;s On we introduce you not only to the activities provided by the club but also to other opportunities to get out and about to take photographs or to see exhibitions or listen to interesting speakers. However we can only do this if we know what is going on outside the club. The website now includes two additional features the first is a calendar which incorporates not only the syllabus but other events and the second is a guide to local events provided by an outside source, and our new Weather Forecast Gizmo.

We need input from you to keep What&#39;s On and the calendar up-todate. If you learn of anything which might be of interest to other members whether it be somewhere to go or something to see please let us know.

For general events and photo opportunities please email the details to our events coordinator Steward Elliott. wildprophotos@yahoo.co.uk For other stuff please e-mail it to me secretary@bandd.cc Finally you will see that Andy Phillips has provided covers for the last two weeks. He has supplied me with some more images and there are always my threatened holiday snaps to fill in. However I am sure that there is someone else out there who would like to have their image on the cover and if you would send me an image you have every chance of it being used next week.

The image should be about 1500 pixels wide. What&#39;s On is a landscape publication and therefore landscape images are preferred you will also note that type is placed to the bottom right-hand corner so please take that into account when choosing the photograph.