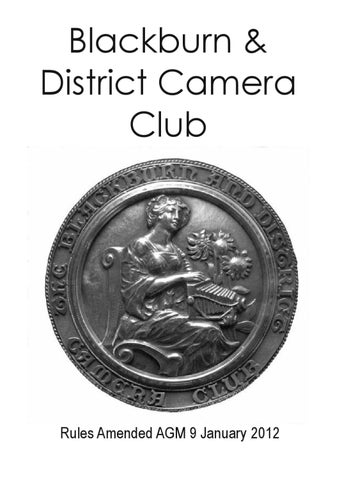 1.1. The club shall be called “The Blackburn and District Camera Club” by which name it shall be known in all its transactions. Hereafter in this document it will be referred to as “the Club”.

Objectives of the Club.

2.1. To educate and encourage all members to advance their photographic knowledge and extend their creative talents by lectures, tuition, discussion and debates, competitions and in any other way deemed suitable by the Committee.

2.2. Images used in the above may be in any form: digital, film, print or transparency, colour or monochrome as long as it is the original work of the author. The final output may be in any form: print, transparency or digital file, as a stand alone image or as part of a bigger whole which involves other disciplines e.g. combining with other media such as music.

Constitution of the Club.

3.1. Membership of the Club shall be open to all regardless of age, sex, race or religion with all members enjoying equal privileges under these rules, except as provided in Rule 4.3. 3.2. Any members under the age of sixteen should be accompanied to meetings by a responsible adult. 3.3. No limit will be placed on the numbers of members to the Club.

3.4. For the transaction of the Clubâ&#x20AC;&#x2122;s business there shall be selected annually, by nomination and ballot at the Annual General Meeting, a Committee consisting of a President, a President elect, a Secretary, a Treasurer and up to eight Club members. Other officers may be elected or coÂ­opted by resolution of the Committee.

3.5. The Committee (a minimum of five to form a quorum) shall have the authorisation to fill up any vacancies as they occur in the committee and also make such bye ­laws as may, from time to time, be deemed expedient. 3.6. The Club’s year shall run from 1st January to 31st December.

3.7. An Annual General Meeting shall be held in January in each year with each Club member being notified of such, a minimum of fourteen days prior to the date set. 3.8. Items on the agenda should be:

3.8.1. The minutes of the last A.G.M., which should be read and approved including any amendments that may arise, 3.8.2. The Treasurer’s report including the audited accounts for the year,

3.9. Should any member wish to raise any points for discussion at the A.G.M. then these should be submitted to the Secretary in writing at least fourteen days before the date of the A.G.M.

4.2. Any person desirous of becoming a member of the Club must be nominated and the appropriate nomination form completed. All such nominations shall be considered at the next Committee meeting. No person shall become a member unless a majority of the committee present accept the nomination. 4.3. The committee reserve the right to withdraw Club membership should a memberâ&#x20AC;&#x2122;s actions or behaviour bring the name of the Club into disrepute.

4.4. Membership of the Club distinctly implies a submission and agreement to all restrictions and penalties, contained in these rules and any additional rules or byeÂ­laws duly enacted, and to any liabilities incurred by the committee as may

be necessary for properly carrying out the objectives of the Club. No member shall be absolved of any allegation of not having received a copy of these rules.

4.5. Any person wishing to resign their membership from the Club must notify the Treasurer in writing on or before the first day of January. Such resignations to be duly acknowledge by the Treasurer. A member being one years in arrears shall be considered to have resigned having been written to by the Treasurer, but shall continue to be liable for any subscription liable and unpaid. 4.6. Any person shall, upon ceasing to be a member of the Club, forfeit all right to any claim upon the Club. 4.7. Each member must communicate any change of address to the Secretary. All notices sent to such address will be considered to have been delivered.

4.8. No member will be allowed to use the Club for commercial purposes.

5.1. On being accepted as a member of the Club and having paid full subscription, a member shall be entitled on application to the Secretary to use photographic equipment belonging to the Club.

5.2. Members are at liberty to introduce visitors to any of the usual meetings of the Club, but the Committee shall have the authority to refuse admission or limit the number of such visitors.

6.1. The annual subscription for each ensuing year will be reviewed and fixed at the Annual General Meeting and shall be due thereafter.

6.2. New members joining the Club during the Club year can be charged a pro足rata rate of subscription. 6.3. On receipt of the subscription, the Treasurer will issue a receipt and a Club membership card.

6.4. Every Club member will be given a copy of these rules.

7.1. The accounts of the Club shall be audited annually by two Auditors, these to be elected from members of the Club at the A.G.M. A copy of the balance sheet made up to December 31st shall be available for each member. 7.2. All cheques shall bear the signature of two official appointed by the Committee.

7.3. The funds of the Club shall be under the control of the Committee and all accounts passed by them. No accumulated funds shall be paid as dividends, gifts, divisions or bonuses unto or between any of the Club members. 7.4. The Club can only be wound up at an A.G.M. or Special General Meeting if two thirds of the Club members present vote in favour of a winding motion. Assets of the Club, in accordance with Rule 7.3., cannot

be distributed between members but must be given to another Photographic Organisation(s), a local school, or sold and the proceeds given to a registered charity or charities as decided by the Committee.

A Special General Meeting shall be called by the Committee on the requisition of eight members, such requisition to be sent in writing to the Secretary, along with every Club member being informed fourteen days before the date of the proposed meeting.

8.2. In all cases of Special General Meetings, no business shall be transacted except that stated on the requisition and notice calling a meeting.

8.5. In case any matter arising that is not provided for in these rules, or by the objectives of the Club, or there are any doubts as to the interpretation of such rules or objectives, the same shall be determined by the Committee whose ruling shall be final.

9.1. Members of the Club shall conform to any rules and regulations of the premises the Committee has hired on behalf of the Club and for the purpose of holding an official Club function.