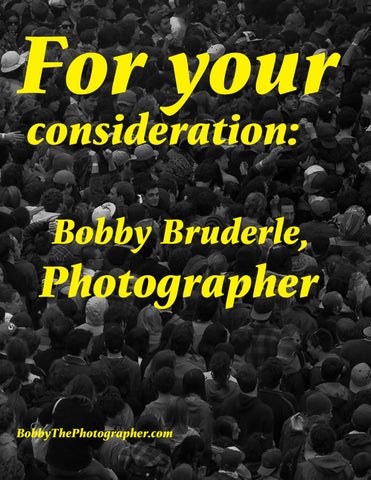 he more the Internet continues to take over, and as publications continue to die, our need for something tangible increases. This magazine represents a selection of my work spanning almost a year. I wanted to make sure that even if all my hard drives crash and all my backup sites file chapter 11, this small portion of my work will still survive. I made this as much for myself as I did for you. I hope you enjoy it!

One of the more surreal experiences I had this year was my was at a rave in MontrĂŠal. I had never been to one before and really didnâ&#x20AC;&#x2122;t know what to expect. I did know there would be drugs and loud music. Everything else came as a suprise.

Myra Myra is one of my favorite subjects. She is confident, beautiful and talented. She also calls me up when she needs a portrait. The latter of those qualifications led to this album art photoshoot.

is a local legend in Burlington, VT. He owns the local skateshop and was a competitive skater until a few years ago when he sustained a serious brain injury. He fell skating at a reported 50 miles an hour. The day I was scheduled to shoot his portrait he broke his wrist in five places just skating to work. Theses images are from the reshoot a week later.

Hospital Holidays When it started it felt like a heart attack. It was late at night and I was partying. I decided to get some McDonalds and sleep it off. In the morning, the sharp pain in my chest had not gone away. I called my mom and she drove me to the hospital. Luckily, if you say your chest hurts, the ER nurses rush you along. The doctor said that my left lung had collapsed. Apparently it wasnâ&#x20AC;&#x2122;t a big deal and it happened to tall skinny dudes all the time. He then rushed in a team of nurses and they proceeded to jam a plastic tube into my chest cavity. He told me I would be out the next morning. I ended up staying in the hospital for 12 days over Christmas and New Yearâ&#x20AC;&#x2122;s. The images that follow were influenced by a fog of painkillers and the unbearable boredom of hospital living.

Hospital Smokers Last year I lived far from campus. I walked to classes every day, often early and often in freezing weather. Between my dorm and campus was the hospital. I passed it everyday and saw people smoking, 100 feet from the building, freezing. Apparently the hospital does not provide a smoking hut or other shelter for hospital workers and patients. I donâ&#x20AC;&#x2122;t condone smoking, but I think it is hard enough to be spending time at a hospital, working or visiting loved ones, to be forced to go out into the cold to smoke. This year I decided to photograph the people I saw -- patients, nurses, cafeteria workers and visitors. All suffering to feed their common addiction.