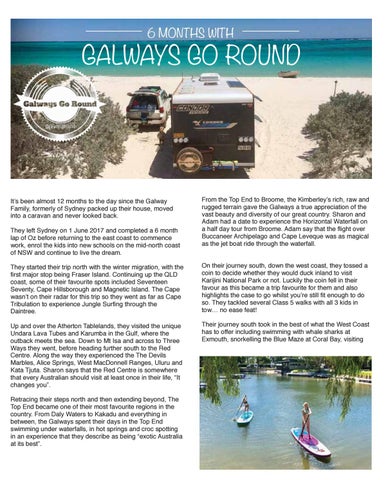 It’s been almost 12 months to the day since the Galway Family, formerly of Sydney packed up their house, moved into a caravan and never looked back. They left Sydney on 1 June 2017 and completed a 6 month lap of Oz before returning to the east coast to commence work, enrol the kids into new schools on the mid-north coast of NSW and continue to live the dream.

From the Top End to Broome, the Kimberley’s rich, raw and rugged terrain gave the Galways a true appreciation of the vast beauty and diversity of our great country. Sharon and Adam had a date to experience the Horizontal Waterfall on a half day tour from Broome. Adam say that the flight over Buccaneer Archipelago and Cape Leveque was as magical as the jet boat ride through the waterfall.

They started their trip north with the winter migration, with the first major stop being Fraser Island. Continuing up the QLD coast, some of their favourite spots included Seventeen Seventy, Cape Hillsborough and Magnetic Island. The Cape wasn’t on their radar for this trip so they went as far as Cape Tribulation to experience Jungle Surfing through the Daintree.

On their journey south, down the west coast, they tossed a coin to decide whether they would duck inland to visit Karijini National Park or not. Luckily the coin fell in their favour as this became a trip favourite for them and also highlights the case to go whilst you’re still fit enough to do so. They tackled several Class 5 walks with all 3 kids in tow… no ease feat!

Up and over the Atherton Tablelands, they visited the unique Undara Lava Tubes and Karumba in the Gulf, where the outback meets the sea. Down to Mt Isa and across to Three Ways they went, before heading further south to the Red Centre. Along the way they experienced the The Devils Marbles, Alice Springs, West MacDonnell Ranges, Uluru and Kata Tjuta. Sharon says that the Red Centre is somewhere that every Australian should visit at least once in their life, “It changes you”.

Their journey south took in the best of what the West Coast has to offer including swimming with whale sharks at Exmouth, snorkelling the Blue Maze at Coral Bay, visiting

Retracing their steps north and then extending beyond, The Top End became one of their most favourite regions in the country. From Daly Waters to Kakadu and everything in between, the Galways spent their days in the Top End swimming under waterfalls, in hot springs and croc spotting in an experience that they describe as being “exotic Australia at its best”. 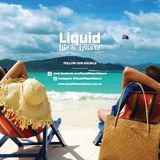