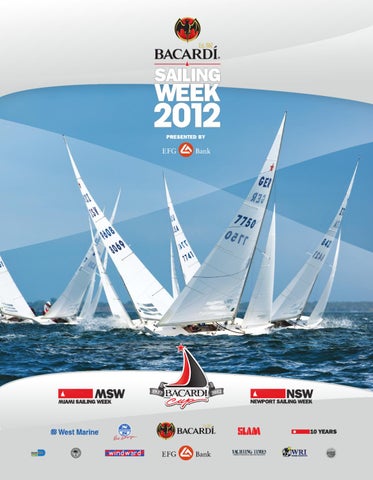 Come check out Windwardâ&#x20AC;&#x2122;s all new line of authentic spinnaker sailcloth D ring belts. Windward was founded in 2010 and has grown within the sailing world. Weâ&#x20AC;&#x2122;re very happy to be at the 2012 Bacardi Sailing Week and would like to wish everyone a great week on the water. Stop by to have a look and say hello.

Dear friends, I would like to extend a warm welcome to all of you at the 85th BACARDI Cup and to the third annual BACARDI Sailing Week. This year marks the 50th year of racing in Miami and we are particularly proud to see that the regatta continues to attract an increasing number of the world’s most talented sailors to the beautiful waters of Biscayne Bay. We also look forward to sharing with you the celebration of another special milestone in the history of our Company. On February 4th 2012, the BACARDI celebrated the 150th anniversary of the Company, and the creation of the world’s first clear rum, BACARDI Superior. Unfortunately, this year will be first year without our beloved host “Tito” Argamasilla Bacardi who recently lost his battle with cancer. We will be remembering and honoring his memory throughout the weeklong event. BACARDI USA, Inc. is pleased to sponsor this event, which embodies sportsmanship and the exhilarating racing spirit typical of small one-design boats. I am pleased and grateful that the BACARDI Cup traditions have been embraced by all sailors making the BACARDI Cup and BACARDI Sailing Week regattas unforgettable on and off the water. Last but not least allow me to thank Coral Reef Yacht Club for their continuous support throughout the years. I’d also like to express gratitude to the dedicated and enthusiastic volunteers at the Biscayne Bay Yacht Club, Coconut Grove Sailing Club, US Sailing Center, Shake A Leg, Sail Newport and all of those who will be instrumental in making our regattas successful. Thank you for your commitment and support to sailing and our events, and we hope you will enjoy your time this week helping us celebrate our Company’s 150th anniversary year.

A word from the Chairman For 2012, we organized a special regatta for many different reasons. First and foremost we would like to honor the life of Tito Bacardi who cherished this event and taught us core values such as sportsmanship. We will also celebrate the 150th anniversary of BACARDI and the 85th anniversary of the BACARDI Cup. Along with Regatta Chair Mark Pincus, the Judges and everyone involved, it is my pleasure to welcome you to our regattas. In addition it is my pleasure to welcome back EFG Bank as our Presenting sponsor for both events now known as BACARDI Sailing Week Presented by EFG Bank. If you have a chance, please take the time to thank all our sponsors for supporting our beloved sport. In 2010 we introduced a new format keeping true to the tradition and camaraderie of the BACARDI Cup. The Star Class competitors welcomed to the beautiful turquoise waters of Biscayne Bay the Audi Melges 20, the Melges 24, the Viper 640. In 2012 it’s my pleasure to welcome the J/80 class who made their first appearance last year in Newport. We encourage you to take advantage of our social area and events that we have organized with the precious support of our hosts. I truly hope that you will also enjoy the art exhibit featuring remarkable sailing photographer Onne van der Wal. Whether you come as a competitor or as a spectator, your crew, your friends and your family will find that our events and hospitality are a big part of what makes BACARDI Sailing Week Presented by EFG Bank a memorable experience.

Yachting Times Magazine is the only bilingual (English & Spanish) boating and yachting lifestyle magazine in America. Yachting Times is a luxury publication with very extensive and select readership and distribution channels. YTM can now be found in hundreds of luxury resorts, hotels, private social clubs and yacht clubs worldwide, as well as in West Marineâ&#x20AC;&#x2122;s top 100 stores. Yachting Times is present every year at exclusive yachting venues worldwide, like the BACARDI Miami and Newport Sailing Weeks, the Panerai North American Classic Circuit, Antigua Classic Yacht Regatta and Trofeo Almirante Conde de Barcelona. Visit YTMâ&#x20AC;&#x2122;s bilingual website where you can access current and past issues at your leisure. WWW.YACHTINGTIMESMAGAZINE.COM

West Marine, the largest specialty retailer of boating supplies and accessories, has more than 330 company-owned stores located in 38 states, Puerto Rico and Canada and two franchised stores located in Turkey. Our call center and Internet channels offer Customers over 60,000 products plus the convenience of exchanging catalog and Internet purchases at our Store locations. Our Port Supply division is one of the largest wholesale distributors of marine equipment serving boat manufacturers, marine services, commercial vessel operators and government agencies.  We are committed to improving and conserving marine habitats so that future generations can enjoy fish and sustainable fishing, reducing the impact on the environment and contributing to communities they operate in.  For more information on West Marine’s products and store locations, or to start shopping, visit : WWW.WESTMARINE.COM

A WORD FROM THE CITY OF MIAMI Dear Sailors and Friends, On behalf of our Mayor and my fellow City of Miami Commissioners, I would like to welcome you to the 2012 BACARDI Miami Sailing Week, March 4 through March 10. We are honored to again be hosting the greatest sailors in the world for this outstanding event. The regatta has a long tradition stretching back to 1927, when it began in Cuba and 50 years ago moved to Miami. We would like to acknowledge BACARDI’s continued patronage of the regatta during that time and also celebrate BACARDI’s 150-year anniversary as the world’s premier spirits company. We are very happy that more than 500 sailors from 22 countries are participating in this year’s regatta. Hotels in the area are expecting droves of entrants along with sailing fans, friends and family. Many hotels are reporting they are at capacity, which is great news for the local economy! All five of the City of Miami’s sailing venues are participating this year including Coral Reef Yacht Club, Biscayne Bay Yacht Club, U.S. Olympic Sailing Center, Shake-A-Leg and Coconut Grove Sailing Club. The BACARDI Miami Sailing Week Hospitality Village will host a new art exhibit by the award-winning nautical photographer Onne van der Wal, who is world renowned for the unique composition, brilliant colors and tack-sharp details of his work. BACARDI will also be sponsoring events and drink specials all week long in the Coconut Grove Village Center. We are proud of our association with BACARDI and the incredible impact Miami Sailing Week has on the City of Miami. Sail fast, Sail safe, and Sail the Grove! Yours very truly,

A WORD FROM THE CITY OF NEWPORT Dear Sailors and Friends, On behalf of the city of Newport, I would like to welcome you to Newport, The Sailing Capital of the World. While you are here sailing in the event, I hope you enjoy what Newport is famous for – a spectacular harbor and world-class sailing venue. No other area has hosted more yachting events than Newport. The City-by-the Sea has been the home and sailing waters of such sailing luminaries as Harold “Mike” Vanderbilt, Sir Thomas Lipton, Rod Stephens, Ted Hood, Ted Turner, Gary Jobson, Dennis Conner and Olin Stephens. Thousands of world-class sailing events have been held in Newport where the 2012 BACARDI Newport Sailing Week Regatta will take place. We are honored to be chosen as the Northern location for the expansion of the Bacardi Racing Series with its longstanding history of success. Please enjoy racing on magnificent Narragansett Bay and the hospitality of Newport with our fine restaurants, hotel, taverns, shops and attractions. Sail safe and best of luck. Sincerely,

Good luck to all sailors at the 2012 Bacardi Cup!

West Marine is Proud to Support

Good luck to all participants!

Vis it one of our area s tores or go to wes tmarine.com to find a location near you.

windward Come check out Windward’s all new line of authentic spinnaker sailcloth D ring belts. Windward was founded in 2010 and has grown within the sailing world. We’re very happy to be at the 2012 Bacardi Sailing Week and would like to wish everyone a great week on the water. Stop by to have a look and say hello.

Practitioners of the craft of wealth management

PARTY TOGETHER RESPONSIBLY. THE PRODUCTS SHOWN IN THIS PHOTO ARE HISTORICAL AND ARE NOT FOR SALE. www.bacardi.com ©2012 BACARDI AND THE BAT DEVICE ARE REGISTERED TRADEMARKS OF BACARDI & COMPANY LIMITED. BACARDI U.S.A., INC., CORAL GABLES, FL. RUM - 40% ALC. BY VOL.

HISTORY’S SUPPOSED TO BE BORING. NOBODY TOLD US. This year, we celebrate Bacardi’s 150th anniversary. When your story begins with the creation of the world’s smoothest rum, it’s not long before you’re rubbing elbows with rebels and royalty, introducing rum to cola, and partying through Prohibition. It’s not your average story, because we’re not your average rum. Let’s raise a glass to the next 150 and keep the party going.