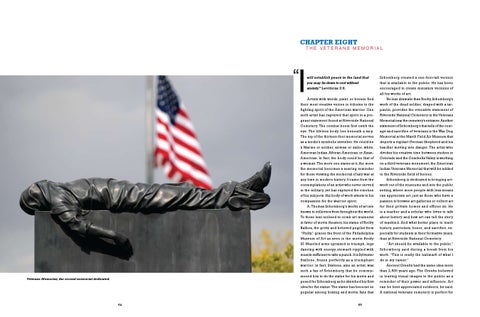 will establish peace in the land that you may lie down to rest without anxiety.” Leviticus 2:6.

Artists with words, paint, or bronze find their most creative voices in tributes to the fighting spirit of the American warrior. One such artist has captured that spirit in a poignant statement found at Riverside National Cemetery. The combat boots first catch the eye. The lifeless body lies beneath a tarp. The top of the thirteen-foot memorial serves as a medic’s symbolic stretcher. He could be a Marine or soldier, airman or sailor, white, American Indian, African-American, or AsianAmerican. In fact, the body could be that of a woman. The more one stares at it, the more the memorial becomes a searing reminder for those viewing the memorial of any war at any time in modern history. It came from the contemplations of an artist who never served in the military, yet has captured the emotion of his subjects. His body of work attests to his compassion for the warrior spirit. A. Thomas Schomberg’s works of art are known to collectors from throughout the world. To those less inclined to comb art museums in favor of movie theaters, his statue of Rocky Balboa, the gritty and beloved pugilist from “Philly,” graces the front of the Philadelphia Museum of Art as seen in the movie Rocky III. Muscled arms upraised in triumph, legs dancing with energy, stomach rippled with muscle sufficient to take a punch. It is Sylvester Stallone, frozen perfectly as a triumphant warrior. In fact, Stallone, also an artist, was such a fan of Schomberg that he commissioned him to do the statue for his movie and posed for Schomberg as he sketched his first idea for the statue. The statue has become so popular among boxing and movie fans that

Schomberg created a one-foot-tall version that is available to the public. He has been encouraged to create miniature versions of all his works of art. No less dramatic than Rocky, Schomberg’s work of the dead soldier, draped with a tarpaulin, provides the evocative statement of Riverside National Cemetery in the Veterans Memorial near the cemetery’s entrance.Another statement of Schomberg’s that tells of the courage and sacrifice of veterans is the War Dog Memorial at the March Field Air Museum that depicts a vigilant German Shepherd and his handler moving into danger. The artist who divides his creative time between studios in Colorado and the Coachella Valley is working on a third veterans monument, the American Indian Veterans Memorial that will be added to the Riverside field of heroes. Schomberg is dedicated to bringing artwork out of the museums and into the public setting, where more people with less means can appreciate art, just as those who have a passion to browse art galleries or collect art for their private homes and offices do. He is a teacher and a scholar who loves to talk about history and how art can tell the story of mankind. And what better place to teach history, patriotism, honor, and sacrifice, especially for students in their formative years, than at Riverside National Cemetery. “Art should be available to the public,” Schomberg said during a break from his work. “This is really the hallmark of what I do in my career.” Ancient Greeks had the same idea more than 2,500 years ago. The Greeks believed in leaving visual images to the public as a reminder of their power and influence. Art can be best appreciated outdoors, he said. A national veterans cemetery is perfect for